Kids Encyclopedia Facts
Not to be confused with New York Transit Museum or New York Museum of Transportation.

The Trolley Museum of New York, a non-profit organization, is located at 89 East Strand Street, Kingston, New York. The museum is open to the public on a seasonal schedule, but volunteer activities relating to the preservation of historic transit are year-round.

The museum was founded in 1955 in Brooklyn to save some of the last trolley cars still in New York City. During the early years of the museum's existence, it had no permanent home. The growing collection of trolley and subway cars were stored in various locations, such as Staten Island and northern New Jersey. On a few occasions until the city took down the last of the overhead wire in the early 1960s, the museum operated a Swedish trolley car on McDonald Avenue, Brooklyn. The museum also held movie nights for members in a Peter Witt streetcar at St. George, Staten Island. 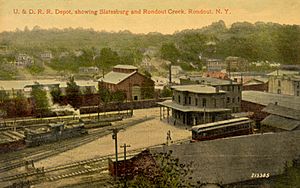 The railroad yard at Rondout.

In 1983 the museum finally found a permanent home in Kingston, occupying the abandoned Rondout shops area, MP 1, of the Ulster and Delaware Railroad (U&D). As a condition of the museum's charter with the city of Kingston, the museum had to immediately begin public operations. At the time, everything in the museum collection was electric powered and the U&D tracks were not equipped for electric operation. The museum acquired a Doodlebug (a former Sperry Rail Service car) from Connecticut and began public operation on July 4, 1983. At first, less than a mile of track was usable, but within two years the run was extended to Kingston Point to provide scenic views of the Hudson River. In 2000 the museum began operating a trolley from Johnstown, Pennsylvania after a nine-year restoration.

The museum leases the yard and about 1.5 miles of right of way and track from the City of Kingston. This includes the former U&D main line from Kingston Point, MP 0, to about MP 1.1, plus a spur track that runs from the yard along Ferry Street to T. R. Gallo Park at Rondout Landing. The Museum operates on a seasonal schedule on weekends and holidays.

Notable items in the collection:

All content from Kiddle encyclopedia articles (including the article images and facts) can be freely used under Attribution-ShareAlike license, unless stated otherwise. Cite this article:
Trolley Museum of New York Facts for Kids. Kiddle Encyclopedia.