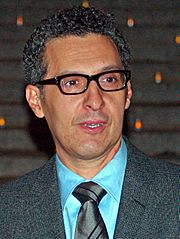 John Michael Turturro (born February 28, 1957) is an Italian-American movie and television, voice actor, writer and director known for his roles in the movies; Do the Right Thing (1989), Miller's Crossing (1990), Barton Fink (1991), Quiz Show (1994), The Big Lebowski (1998), O Brother, Where Art Thou? (2000) and the Transformers movie series. He has appeared in over sixty films, and has worked mostly with the Coen brothers, Adam Sandler and Spike Lee. Turturro also starred in Disney/Pixar Cars 2. He will star as Carmine Falcone in the 2021 DCEU movie The Batman.

Turturro was born in Brooklyn, New York on February 28, 1957. Turturro is currently married to Katherine Borowitz since 1985, they have two children.

All content from Kiddle encyclopedia articles (including the article images and facts) can be freely used under Attribution-ShareAlike license, unless stated otherwise. Cite this article:
John Turturro Facts for Kids. Kiddle Encyclopedia.