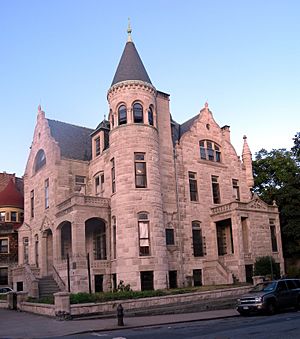 McGinnis was orphaned at the age of eight. He was working as a bellhop in Pontiac, Michigan, when he was discovered by circus advertising advance man Frederic Harrison Bailey (a nephew of circus pioneer Hachaliah Bailey) as a teenager. F.H. Bailey gave McGinnis a job as his assistant, and the two traveled together for many years. McGinnis eventually adopted F.H. Bailey's surname to become James A. Bailey.

Bailey later associated with James E. Cooper, and by the time he was 22, he was manager of the Cooper and Bailey circus. He then met with P.T. Barnum, and together they established Barnum and Bailey's Circus (for which Bailey was instrumental in obtaining Jumbo the Elephant) in 1880, with their combined show opening the following spring in Madison Square Garden.

Bailey died of erysipelas in 1906 at age 58. He is buried in Woodlawn Cemetery, in The Bronx, New York City. His widow subsequently sold the circus to the Ringling brothers in 1907, who eventually merged the rival operations in 1919.

All content from Kiddle encyclopedia articles (including the article images and facts) can be freely used under Attribution-ShareAlike license, unless stated otherwise. Cite this article:
James Anthony Bailey Facts for Kids. Kiddle Encyclopedia.