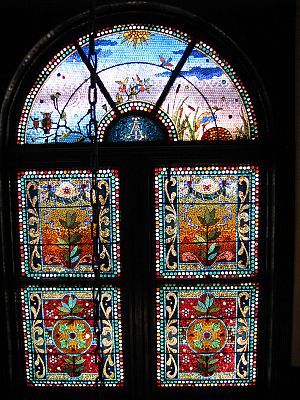 The James A. and Ruth M. Bailey House is a large freestanding limestone mansion located at 10 St Nicholas Place at West 150th Street in the Sugar Hill area of Harlem, Manhattan, New York City. The house was built from 1886 to 1888 and was designed by architect Samuel Burrage Reed in the Romanesque Revival style for circus impresario James Anthony Bailey of the Barnum & Bailey Circus. When it was constructed there were few other buildings in the area, and as a result, sitting as it does on an escarpment, the Bailey Mansion had a clear view to the east of the Long Island Sound.

The Bailey House was designated a New York City Landmark in 1974, and was added to the National Register of Historic Places in 1980.

All content from Kiddle encyclopedia articles (including the article images and facts) can be freely used under Attribution-ShareAlike license, unless stated otherwise. Cite this article:
James Bailey House Facts for Kids. Kiddle Encyclopedia.