Hunts Point is a neighborhood located on a peninsula in the South Bronx of New York City. It is the location of one of the largest food distribution facilities in the world, the Hunts Point Cooperative Market. Its boundaries are the Bruckner Expressway to the west and north, the Bronx River to the east, and the East River to the south. Hunts Point Avenue is the primary street through Hunts Point.

The neighborhood is part of Bronx Community District 2, and its ZIP Code is 10474. The neighborhood is served by the New York City Police Department's 41st Precinct. NYCHA property in the area is patrolled by P.S.A. 7 at 737 Melrose Avenue located in the Melrose section of the Bronx. 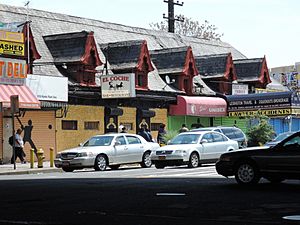 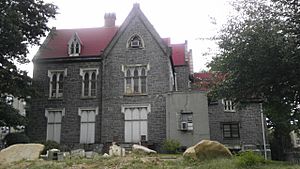 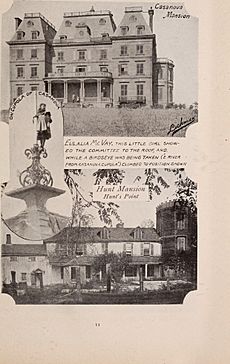 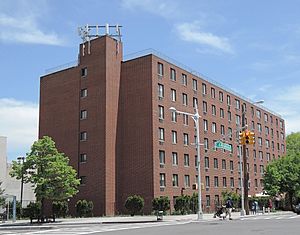 Europeans first settled Hunts Point in 1663. At this time, Edward Jessup and John Richardson arrived on the peninsula and purchased the land from the Wekkguasegeeck tribe indigenous to the area. After Jessup died, his widow Elizabeth, entrusted the land to Thomas Hunt Jr., her son in-law for whom the area is named.

In the years between the Hunts' inheritance and 1850, several other wealthy landowning families occupied the peninsula. Legend has it that George Fox (1624–1691), founder of the Society of Friends (commonly known as Quakers), preached in the area in 1672. William H. Fox, a descendant of the Quaker leader, and his wife Charlotte Leggett, owned much of the land that is now Hunts Point.

As time passed and more New Yorkers became aware of Hunts Point, more City dwellers flocked to the area between 1850 and 1900. Later, the property wound up in the hands of Fox's and Leggett's son-in-law, H.D. Tiffany, a member of the family that owned the famous jewelry and decorative arts store Tiffany & Co. now on Fifth Avenue in Manhattan. Fox, Tiffany and Leggett Streets derive their names from these former landowners. In 1909, the Fox mansion was demolished.

Hunts Point’s status as a home and vacation spot to the city’s elite came to a rather abrupt end in the period following World War I. At this time, IRT Pelham Line was built along Southern Boulevard. Apartment buildings replaced mansions, streets replaced meadows and Hunts Point became a virtual melting pot for the City’s masses.

Aside from being a period of residential growth for Hunts Point, the 20th century has also been a time of industrial expansion for the peninsula. As more people moved to the area, the city’s business owners began to realize the advantages of locating to Hunts Point. Among them were the convenient access to the Tri-State region, the existing rail lines running through the Hunts Point area and the abundance of space available for the development of industrial and commercial activity.

The second half of the 20th century, however, proved a difficult time for the district's residential community. Characterized by frequent arson and mass abandonment from the 1960s through the 1990s, this period marked a low point in the area's history. Living conditions became so difficult that almost 60,000 residents, approximately two-thirds of the existing population, left the neighborhood during the 1970s. The first full-service post office did not open in the neighborhood until 2001.

The Hunts Point peninsula has a population of 8,684. It is a low-income residential neighborhood largely made up of Puerto Ricans, with smaller numbers of African Americans, Dominicans, Mexicans, and other Latin Americans. Hunts Point has one of the highest concentrations of Hispanics in all of New York City. Almost half of the population lives below the federal poverty line.

The entirety of Community District 2, which comprises Hunts Point and Longwood, had 56,144 inhabitants as of NYC Health's 2018 Community Health Profile, with an average life expectancy of 78.9 years. This is lower than the median life expectancy of 81.2 for all New York City neighborhoods. Most inhabitants are youth and middle-aged adults: 28% are between the ages of between 0–17, 29% between 25–44, and 21% between 45–64. The ratio of college-aged and elderly residents was lower, at 12% and 10% respectively.

Hunts Point is a peninsula located at the confluence of the Bronx River and the East River, which is actually a tidal strait connecting Upper New York Bay to the Long Island Sound. The total land area is approximately 690 acres (2.8 km2).

Most of the land area in Hunts Point is dominated by industry. There is a small but dense residential pocket that occupies the high ground in the northern half of the peninsula along Hunts Point Avenue. It consists primarily of older apartment buildings with a smaller number of semi-detached multi-unit row houses. The area includes a recently developed park by the riverside, called the Hunts Point Riverside Park.

The New York City Department of City Planning designated a Special Hunts Point District in 2004 to incorporate zoning changes to encourage growth of the food distribution center while protecting the residential neighborhood.

Hunts Point Riverside Park was spearheaded by Majora Carter in 2000, and after several iterations, won the 2009 Rudy Bruner Award for Excellence in Public Spaces.

The largest park in Hunts Point is the 5-acre (20,000 m2) Barretto Point Park on the East River waterfront. It offers piers for fishing, sites for launching canoes and kayaks, and a floating swimming pool during the summer. There are also volleyball and basketball courts, a small amphitheater, and restroom facilities.

Riverside Park before clean up

Riverside Park after clean up

Hunts Point is home to one of the largest food distribution centers in the world, covering 329 acres (1.33 km2). The Produce and Meat Distribution Center were opened along the Bronx river in 1967 and 1974, respectively. In 2005, Hunts Point became the site for New York City's New Fulton Fish Market, which replaced the 180-year-old fish market formerly located in downtown Manhattan. Over 800 industrial businesses, employing over 25,000 workers, are located on the peninsula. A large concentration of food wholesalers, distributors, and food processing businesses are located in the New York City zoned industrial business park. Below are some of the facilities that make up the Food Distribution Center in Hunts Point:

The New York City Terminal Market carries fresh fruit and vegetables from 49 states and 55 foreign countries. The market consists of four buildings, each one-third of a mile in length. More than 65 fruit and vegetable wholesalers own and operate the coop, which has 475,000 square feet (44,100 m2) of warehouse space. Each year approximately 2.7 billion pounds of produce are sold from the Market which as recently as 1998 posted $1.5 billion in revenues. The market caters to the largest ethnically diverse region in the world with an estimated population that exceeds 15 million people (New York metropolitan area).

In November 2001, shortly before leaving office, former New York City Mayor Rudolph Giuliani broke ground for the new Fulton Fish Market building in Hunts Point. Nearly four years after the structure was completed, which cost $85 million to build, 55 businesses moved into a 450,000-square-foot (42,000 m2) complex, located within the Hunts Point Food Distribution Center. The facility generates an estimated $1 billion in yearly revenue, as it allows seafood distributors to store their goods in a temperature controlled warehouse with ease of access to NYC, New Jersey and Connecticut.

One secure detention center is located in Hunts Point.

Spofford Juvenile Center was formerly the New York City Department of Juvenile Justice's (DJJ) only Secure Detention center. The facility started as the Youth House for Boys and Youth House for Girls in the mid-1940s, and it moved to Hunts Point in 1957. The Youth House soon became known as Spofford Juvenile Center. On August 1, 1998, when it was vacated by the DJJ; earlier that year, on January 18, the city announced that the Horizon Juvenile Center, in the Mott Haven neighborhood of the Bronx, and the Crossroads Juvenile Center, in Brownsville, Brooklyn, would be opened to replace the Spofford facility. However, ultimately, Spofford was not closed, but was instead renamed Bridges Juvenile Center in 1999. In early 2011, Bridges was closed by the city. In announcing the closure, the Correctional Association of New York recognized that the facility had "a history of poor conditions and brutality against children."

The Vernon C. Bain Correctional Center (VCBC) is an 800-bed barge built on Rikers Island, for $161 million, currently used as part of the New York City Department of Corrections. It is designed to handle inmates from medium- to maximum-security in 16 dormitories and 100 cells. It was opened in 1992 and was named for Vernon C. Bain, a warden who died in a car accident. It has been used by the city of New York as a prison, but has also temporarily held juvenile inmates. 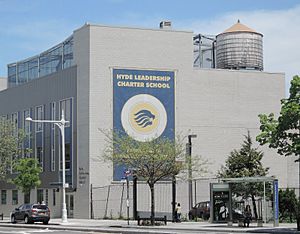 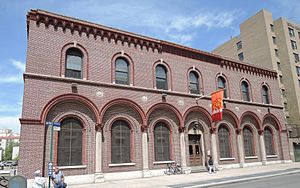 All content from Kiddle encyclopedia articles (including the article images and facts) can be freely used under Attribution-ShareAlike license, unless stated otherwise. Cite this article:
Hunts Point, Bronx Facts for Kids. Kiddle Encyclopedia.