Melrose is a mostly residential neighborhood in the southwestern section of the New York City borough of the Bronx. It adjoins the business and one-time theater area known as The Hub. Melrose is rectangular-shaped, being bordered by Third Avenue on the east, 149th Street on the south, Park Avenue on the west and 161st Street to the north. Melrose Avenue and Third Avenue are the primary thoroughfares through Melrose.

Predominantly German-American in the 19th century it was home to Haffen Brewing Company. The German population waned especially post-World War II. The neighborhood until the 1960s was mostly Irish and Italian. It is now primarily Latino.

Melrose is a high-density neighborhood with a population consisting primarily of Latin Americans and African Americans. Almost half of the population lives below the federal poverty line.

The entirety of Community District 1, which comprises Melrose and Mott Haven, had 98,403 inhabitants as of NYC Health's 2018 Community Health Profile, with an average life expectancy of 77.6 years. This is lower than the median life expectancy of 81.2 for all New York City neighborhoods. Most inhabitants are youth and middle-aged adults: 28% are between the ages of between 0–17, 28% between 25–44, and 21% between 45–64. The ratio of college-aged and elderly residents was lower, at 12% and 10% respectively.

Melrose is dominated by large residential housing complexes of various types, primarily public housing, and tenement style apartment buildings. Most of the original housing stock which consisted of older multi-unit homes and tenements were structurally damaged by arson during the citywide fiscal crisis and eventually razed by the city. In the last decade, construction of modern 2 and 3 unit row-houses and apartment buildings have increased the percentage of owners versus renters. The neighborhood contains one of the highest concentrations of NYCHA projects in the Bronx. The terrain is somewhat hilly. 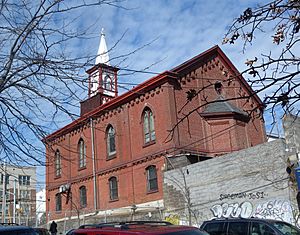 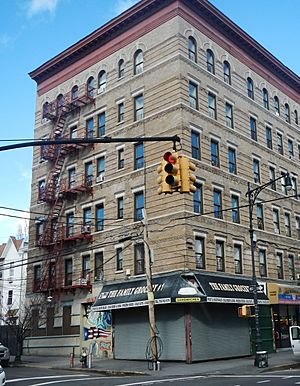 Originally a dense working-class neighborhood, the housing that was often hastily built to capitalize on the turn of the 20th century immigrant escape from Manhattan soon became unsuitable to all but the poorest. A mass exodus soon took place as New York City policy–induced arson soon ravaged the neighborhood throughout the 1960s and 1970s. In 1973, the City of New York dismantled the Third Avenue El (an original draw to the neighborhood) due to low ridership. By the 1980s the neighborhood had decayed severely, and much of the original housing stock was lost. Vacant buildings and then lots became commonplace.

Since the mid-1990s, but especially in the 2000s, significant renewal has taken place. A prominent player in the revitalization efforts has been the group Nos Quedamos which in English means "we stay". Many abandoned structures have been renovated and many lots have been constructed on. In most recent years the area has seen a significant "Green" construction boom. Leading the borough in the number of LEED certified apartment buildings, the largest being Via Verde, winner of the 2013 Rudy Bruner Award for Urban Excellence silver medal. Melrose is also home to The Bronx campus of Boricua College. Despite lingering social problems due to a continued significant poverty presence, Melrose has come a long way from a previously "forgotten" neighborhood.

The Melrose neighborhood has grown since Jimmy Carter's famous visit to the Bronx in 1977 and will continue to do so as the city's last parcels are sold for development. Many parcels are still in the development phase, but will skyrocket the Melrose population.

In 2012, residents expressed concern regarding the Melrose Metro-North station in the neighborhood. Residents would like to see more frequent service, but track and capacity limitations hinder the amount of service available for the stop. Other concerns regarded the lack of handicap access, and the past closure of the main entrance to the stop. The main entrance was closed when the community was at the height of its turmoil, but as the community has regained its footing the desire to have the station open to the primary commercial street, East 161st Street, has grown. 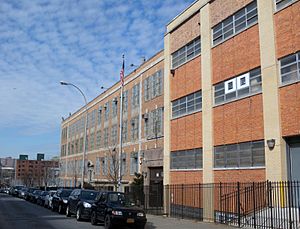 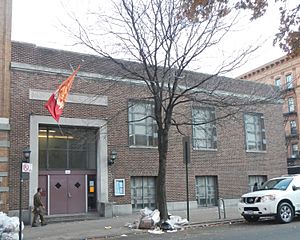 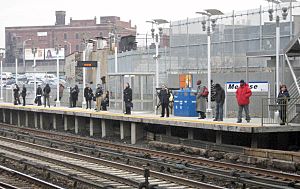 The Metro-North Railroad also stops at Melrose station, a local station on 161st Street that is also served by the Harlem Line.

The New York Public Library operates the Melrose branch at 910 Morris Avenue. The branch, a two-story, 10,000-square-foot (930 m2) Carnegie library, opened in 1914. It originally had four stories, but the top two floors were removed in a 1959 renovation.

All content from Kiddle encyclopedia articles (including the article images and facts) can be freely used under Attribution-ShareAlike license, unless stated otherwise. Cite this article:
Melrose, Bronx Facts for Kids. Kiddle Encyclopedia.