Oak Point, the southern tip of the South Bronx is in Port Morris. The area is also traversed by the Bruckner Expressway, a major freeway. Most of the neighborhood is within walking distance from the Cypress Avenue station of the IRT Pelham Line (6 train). 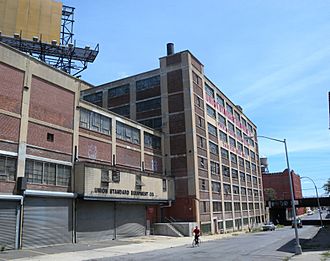 Port Morris has a population of around 3,523. The neighborhood predominately consists of Latin Americans (primarily Puerto Rican), African Americans as well as a small white population concentrated mainly in the western portion of Bruckner Boulevard. Almost half of the population lives below the federal poverty line and receives public assistance (TANF, Home Relief, Supplemental Security Income, and Medicaid). The median income is significantly higher than that of other South Bronx neighborhoods. This is likely due to recent rezoning to increase commercial and residential activity in the area.

The history of Port Morris, as with other neighborhoods, is sometimes confused by the lack of fixed official boundaries. Late in the 20th century the name was sometimes applied to the area to the west, into Mott Haven. Mott Haven by older definition lies to the west rather than north of Port Morris. 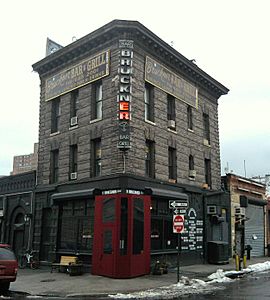 There is some evidence that a British paymaster ship went down off Port Morris's coast during the American Revolutionary War with millions of dollars in gold aboard. No recovery was ever made.

The name comes from a deep water port established along the neighborhood's East River (Long Island Sound) waterfront by Gouverneur Morris Jr., son of Gouverneur Morris, in 1842. He built a two-mile (3 km) railroad from Melrose to his family's holdings on the waterfront, later called the Spuyten Duyvil and Port Morris Railroad, abandoned a hundred years later. The area is dominated by factory and warehouse buildings constructed in the mid-to-late 19th century, convenient to the railroad yards, of which the Oak Point Yard is the main survivor. Notable early businesses were the R. Hoe Co., as well as Cutler & Hammer Tool Works, and Mothers Friend Shirt Waist factory (1888) at Willow Ave. between E. 135th & E. 136th Sts. While many of the early industrial buildings remain, they are little used for manufacturing anymore. The area was the site of the Hell Gate generating plant of Consolidated Edison, where George Metesky, the Mad Bomber who plagued New York City for decades was injured.

The most notable architectural/engineering feature of Port Morris is the northern approach to the Hell Gate Bridge supported by concrete arches (1917) northward from East 132nd Street, between Willow & Walnut Avenues. Plans are afoot to extend the South Bronx Greenway to Randalls Island, crossing Bronx Kill via the Randall's Island Connector under Hell Gate Bridge. The Connector opened on 14 November 2015.

A wave of arson during the 1970s destroyed or damaged many residential, commercial, and industrial structures in the area. Late in the century industry began to return to Port Morris. Many abandoned residential buildings are also being rehabilitated and designated low income housing. 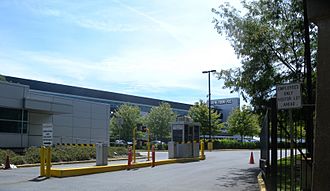 The neighborhood has been experiencing massive revitalization with many historic warehouses, factories and various manufacturing buildings being converted into lofts. The former Estey Piano Corp factory, now The Clock Tower, has the restaurant Charlies Bar & Kitchen operating on the ground level. Port Morris has become a burgeoning community of artists and other young professionals looking for more reasonable options outside of Manhattan. Efforts by the New York Restoration Project are underway to revive the waterfront in an area that historically suffers from high asthma rates. This will create much-needed green space for the community. As a result of these changes, the neighborhood is slowly becoming well known as a hub for upscale eateries in the South Bronx.

Silvercup Studios is planning on converting a 115,000-square-foot warehouse located on 295 Locust Avenue for film and television productions. The facility is scheduled to open in June 2016. 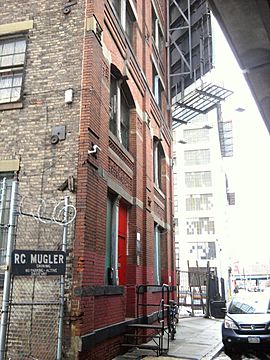 Looking north along Third Avenue at Beethoven Piano factory, the site of one of the proposed luxury towers

The Piano District is the name proposed by two developers for Port Morris. The two developers, Somerset Partners and The Chetrit Group, purchased two riverfront properties for $58 million with the goals of establishing luxury residences and retail. However, there is opposition to the renaming, and critics and proponents have accused one another of racism. The developers were criticized by Melissa Mark-Viverito, the president of the New York City Council for conducting a Halloween rave, attended by numerous celebrities and featuring flaming trash cans and hulks of burnt-out and bullet-riddled cars. Mark-Viverito accused the developers of a lack of empathy and basic awareness.

Bruckner Boulevard, which runs under the Bruckner Expressway, is the primary thoroughfare through Port Morris.

As part of a conceptualization by think tank ReThink Studio that was not recognized by the city or state, a train station in Port Morris will be the northern terminal for a trunk line that would be a regional hub for transportation to other places in the states of New York and Connecticut. The station’s site and context could accommodate connections to Manhattan and LaGuardia Airport via the trunk line, Northeast Corridor, and local bus routes. The station, a planned adjacent convention center, and supporting development is proposed to encourage other growth in the South Bronx.

All content from Kiddle encyclopedia articles (including the article images and facts) can be freely used under Attribution-ShareAlike license, unless stated otherwise. Cite this article:
Port Morris, Bronx Facts for Kids. Kiddle Encyclopedia.