Kids Encyclopedia Facts
This page is about the New York City waterway. For the Vertigo Crime graphic novel, see The Bronx Kill. 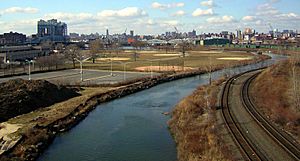 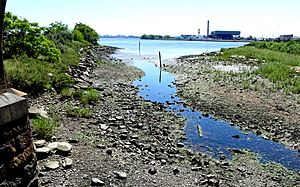 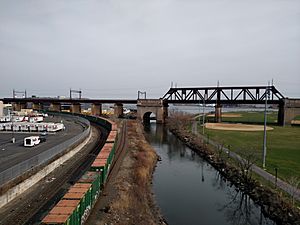 Looking to the east from the Triborough Bridge walkway toward the Hell Gate Bridge viaduct. 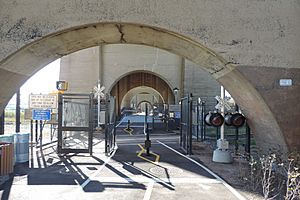 The Bronx Kill is a narrow strait in New York City delineating the southernmost extent of the Bronx and separating it from Randalls Island in Manhattan. It connects the Harlem River to the East River.

The Bronx Kill offers a venue for kayakers and other human-powered boaters without the worry of larger vessel traffic. Canoe and kayak expeditions through the waterway begin on the Harlem River, near the Third Avenue Bridge. Crossings must be well timed for the tides, to ensure both the correct current direction and sufficient water height: at low water, parts of the Bronx Kill entirely bottom out, revealing muddy stretches, and assorted junk. There is also low air draft under the Randalls Island Connector. Consequently, no commercial vessels navigate the kill, with local businesses mostly opting instead for road and rail transport, including the Oak Point Link along its north bank.

In 2001, the New York Power Authority offered to construct a pedestrian bridge linking the Bronx with Randalls Island—part of the agency's remuneration to the community for building two new power plants in the South Bronx. That plan, however, fell by the wayside when local officials argued that an improved Triborough Bridge path would be sufficient. The state authority instead paid for energy efficiency measures in the borough as a whole, including a green roof on the Bronx County Courthouse.

At the time, the two sidewalks of the Triborough Bridge's Bronx Kill span were connected to one long ramp at the Randalls Island end. This provides difficult access. Following years of negotiation for land with the operators of the Harlem River Yards on the north bank of the Kill, the Randalls Island Connector bridge was constructed across the Kill. The $6 million bridge, located underneath Amtrak's Hell Gate Bridge, provides pedestrian and bicycle access between the island and the Port Morris neighborhood of the Bronx and to the South Bronx Greenway. The connector opened in November 2015.

A 2006 plan for a water park—the first in the nation for a large city—on the northwest corner of Randalls Island was controversial. Announced by the Giuliani administration as a $48 million, 15-acre (61,000 m2) project, the proposal expanded to encompass 26 acres (110,000 m2) at a projected cost of $168 million before being cancelled in 2007.

All content from Kiddle encyclopedia articles (including the article images and facts) can be freely used under Attribution-ShareAlike license, unless stated otherwise. Cite this article:
Bronx Kill Facts for Kids. Kiddle Encyclopedia.