Estey Organ Company was an organ manufacturer located in the United States. The company, based in Brattleboro, Vermont, was founded in 1852 by Jacob Estey, who bought out another Brattleboro manufacturing business. At its peak, the company was one of the world's largest organ manufacturers, employed approximately 700 people, and sold its high-quality items as far away as Africa, Great Britain, Australia, and New Zealand. Estey built around 500,000 to 520,000 pump organs between 1846 and 1955. Estey also produced pianos, made at the Estey Piano Company Factory in New York City. 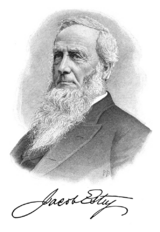 Jacob Estey, born 1814 in Hinsdale, New Hampshire, ran away from an orphanage to Worcester, Massachusetts, where he learned the plumbing trade. In 1835 he arrived in Brattleboro, Vermont at age 21 to work in a plumbing shop. He soon bought the shop, beginning a long career as a successful businessman. He died in 1890.

About 1850, Estey built a two-story shop in Brattleboro and rented it out to a small company that manufactured melodeons. When the renters ran short of cash, Estey took an interest in the business in lieu of rent, eventually becoming sole proprietor. Despite having no musical talent or skills as an inventor, Jacob Estey grew the company into a great success, giving up the plumbing business. In 1855, Estey organized the first manufacturing company to bear his name, Estey & Greene—followed by Estey & Company, J. Estey & Company, Estey Organ Company—and finally, Estey Organ Corporation.

Jacob Estey saw the manufacturing and sale of these instruments, later known as American reed organs, as a new business opportunity.

Over its more than one hundred years, Estey became the largest and best known manufacturer of reed organs in the world. It made more than 520,000 instruments, all labeled Brattleboro, Vt. USA. In 1901, Estey Organ Company began making pipe organs, and became one of the largest American pipe organ manufacturers. They built and sold more than 3200 pipe organs across the US and abroad. The company provided organs for many important locations, including New York City's Capital Theatre, the Sacramento, CA Municipal Auditorium, and Henry Ford's home in Dearborn, Michigan.

Also during the era of silent films, Estey made over 160 theatre organs.

Following World War II, Estey developed and manufactured electronic organs, joining a limited number of companies that manufactured all three types of organs—reed, pipe, and electronic. In the 1950s, Harald Bode joined Estey. He had been a pioneer in the research and development of electronic musical instrument since the 1930s, and had developed the Bode Organ in 1951. At Estey, he helped develop the Estey Electronic Organ model S and AS-1 (1954), then served as a chief engineer and a vice-president of Estey during the late 1950s.

Fletcher Music Centers purchased the Estey Organ company name in 1989, and subsequently produced several models of home organs. The models included a lifetime free lesson program. They sold these throughout the 1990s, exclusively through their chain of retail stores. Fletcher Music Centers and the Estey Organ Company corporate office is in Clearwater, Florida. In 2019 the brand was revived for a series of entry level instruments manufactured in China for sale through the dealer network left without new product after the demise of Lowrey.

The Estey Organ Company's main factory was located southwest of downtown Brattleboro, on the south side of Whetstone Brook between Birge and Organ Streets. At its height, the complex had more than 20 buildings, many of which were interconnected by raised walkways and covered bridges. Several of the buildings were built with distinctive slate siding, resulting in an architecturally unique collection of such structures in the state. One of the buildings now houses the Estey Organ Museum; the entire surviving complex was listed on the National Register of Historic Places in 1980, both for its architecture, and as a major economic force in Brattleboro for many years.

The Estey family had a long tradition of company leadership and community involvement, including residential development such as Esteyville; banking; town government; schools; fire protection; military units; churches; and Vermont state politics and government. Estey Hall on the campus of Shaw University is named after Estey, who contributed to the construction of the building. Fletcher Music Centers continued the tradition of community involvement by helping fund a music therapy wing at All Children's Hospital located in St. Petersburg, Florida.

All content from Kiddle encyclopedia articles (including the article images and facts) can be freely used under Attribution-ShareAlike license, unless stated otherwise. Cite this article:
Estey Organ Facts for Kids. Kiddle Encyclopedia.