Morrisania ( morr-I-say-NEE-ə) is a residential neighborhood in the southwestern Bronx, New York City, New York. Its boundaries are the Cross-Bronx Expressway to the north, Crotona-Prospect Avenue to the east, East 161st Street to the south, and Webster Avenue to the west. Third Avenue is the primary thoroughfare through Morrisania. Its name derives from the Manor of Morrisania, once the entire South Bronx.

The name derives from the Manor of Morrisania, the vast 2,000 acre estate of the powerful and aristocratic Morris family, who at one time owned most of the Bronx as well as much of New Jersey. The family includes Lewis Morris, 4th Lord of the Manor, and a signer of the United States Declaration of Independence, and Gouverneur Morris, penman of the United States Constitution. Both are buried in the crypt at St. Ann's Church of Morrisania. Today the name is most commonly associated with the neighborhood of Morrisania, which is only a small corner of the original Morrisania.

From 1644 to the early 20th century, the land of the neighborhood was the estate of the Morris family in Westchester County. In 1790, Lewis Morris, owner of the estate and signer of the Declaration of Independence, proposed the land as the site of the federal capital. 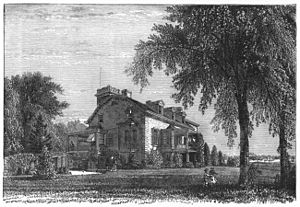 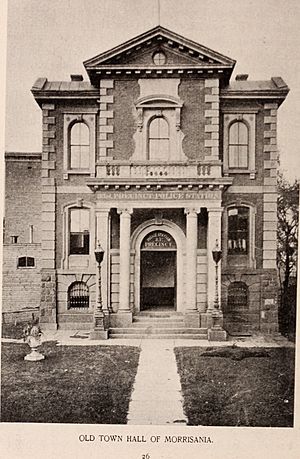 The area was sparsely populated until 1840, when Gouverneur Morris Jr., son of the famous congressional delegate and nephew of Lewis, allowed a railroad to be built across the property. In 1848, he sold the land next to the line for the development of a new town called Morrisania Village. In 1855, additional settlements along the rail line became the town of Morrisania, with its political center in the original 1840 village (which eventually incorporated in 1864). At first the village was an early forerunner of today's bedroom communities, populated by people who worked in Manhattan, but it quickly developed its own local industries and craftsmen as it developed into a full-fledged town. In 1874, the area was annexed to New York City (then consisting only of Manhattan) as part of the Twenty-Third Ward. In 1887, the Third Avenue Elevated was extended to the area to provide easy and quick access to and from Manhattan. By the time the New York City Subway was extended to the area in 1904, a large influx of European immigrants had given the neighborhood an urban character, with tenements replacing houses as the dominant form of dwelling.

In the 1950s along with changing demographics, Robert Moses destroyed various tenements in favor of a colony of public housing. After the construction of the Cross-Bronx Expressway, the poverty that East Tremont suffered spread into Morrisania. As a result, and also due to the aggressive 1968 Program for Action, the Third Avenue El closed in 1973. During this time period a wave of arson destroyed or damaged many of the residential, commercial, and industrial structures in the area.

Many social problems associated with poverty.

After a wave of arson ravaged the low income communities of New York City throughout the 1970s, most of the residential structures in Morrisania were left seriously damaged or destroyed. The city began to rehabilitate many formally abandoned tenement style apartment buildings and designate them low income housing beginning in the late 1970s. Also many subsidized attached multi-unit townhouses and newly constructed apartment buildings have been or are being built on vacant lots across the neighborhood.

Today's Morrisania is a low-income neighborhood that predominantly consists of Latin Americans and African Americans.

The entirety of Community District 3, which comprises Morrisania and Crotona Park East, had 91,601 inhabitants as of NYC Health's 2018 Community Health Profile, with an average life expectancy of 76.2 years. This is lower than the median life expectancy of 81.2 for all New York City neighborhoods. Most inhabitants are youth and middle-aged adults: 29% are between the ages of between 0–17, 29% between 25–44, and 21% between 45–64. The ratio of college-aged and elderly residents was lower, at 12% and 9% respectively. 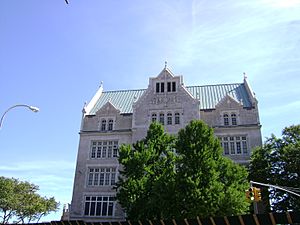 Morrisania is dominated by public housing complexes of various types, vacant lots, and tenement buildings. Most of the original housing stock which consisted of older multi-unit homes and tenements were structurally damaged by arson and eventually razed by the city. The total land area is over a square mile. The terrain is somewhat hilly. 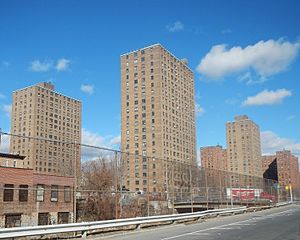 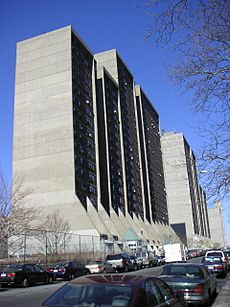 The New York Public Library operates the Morrisania branch at 610 East 169th Street. The branch, a Carnegie library, opened in 1908 and was designed by Babb, Cook & Willard. Another branch, the Grand Concourse branch, is located at 155 East 173rd Street. The branch is a two-story structure that opened in 1959.

All content from Kiddle encyclopedia articles (including the article images and facts) can be freely used under Attribution-ShareAlike license, unless stated otherwise. Cite this article:
Morrisania, Bronx Facts for Kids. Kiddle Encyclopedia.