Mott Haven is a primarily residential neighborhood in the southwestern section of the New York City borough of the Bronx. Its boundaries, starting from the north and moving clockwise, are East 149th Street to the north, the Bruckner Expressway to the east, the Major Deegan Expressway to the south, and the Harlem River to the west. East 138th Street is the primary east–west thoroughfare through Mott Haven.

The neighborhood is part of Bronx Community Board 1, and is located within ZIP Codes 10451, 10454, and 10455. Mott Haven is patrolled by the New York City Police Department's 40th Precinct.

Mott Haven is a high-density and mainly low-income neighborhood. Like most neighborhoods in New York City, the vast majority of households are renter-occupied. The neighborhood is largely Puerto Rican, with smaller numbers of African Americans, Mexicans and Dominicans present.

The entirety of Community District 1, which comprises Mott Haven and Melrose, had 98,403 inhabitants as of NYC Health's 2018 Community Health Profile, with an average life expectancy of 77.6 years. This is lower than the median life expectancy of 81.2 for all New York City neighborhoods. Most inhabitants are youth and middle-aged adults: 28% are between the ages of between 0–17, 28% between 25–44, and 21% between 45–64. The ratio of college-aged and elderly residents was lower, at 12% and 10% respectively. 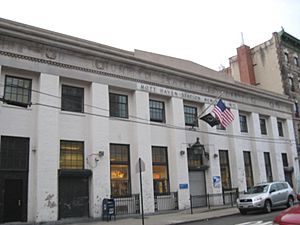 Mott Haven is dominated by tenement-style apartment buildings and large public housing complexes. There are three historical districts consisting of brownstone-style rowhouses. In the last two decades, construction of modern 2- and 3-unit rowhouses and apartment buildings has increased the percentage of owner-occupiers. The neighborhood contains one of the highest concentrations of NYCHA projects in the Bronx. The total land area is roughly one square mile. The terrain is low-lying and flat except around St. Mary's Park where it is somewhat hilly.

St. Ann's Episcopal Church is located on the west side of St. Ann's Avenue between East 139th and East 141st Streets. It is the Bronx's oldest church, having been built in 1841 and dedicated to Gouverneur Morris's mother Ann. Notable figures buried there include Lewis Morris, a signer of the Declaration of Independence; Gouverneur Morris; and former mayor of New York, R. H. Morris. 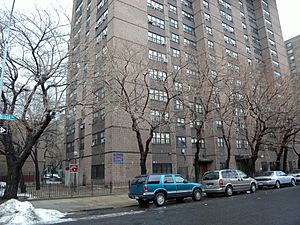 The seventeen NYCHA developments in Mott Haven illustrate the various types of public housing initiatives in vogue in New York City over the decades.

Mott Haven is home to Lincoln Hospital on 149 Street between Park and Morris Avenues. The hospital was founded in 1839 and now has 342 beds. 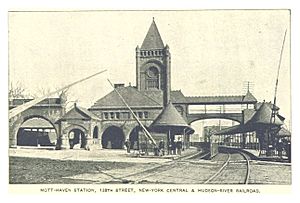 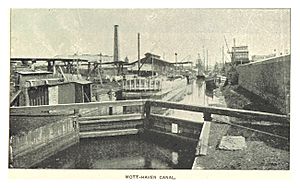 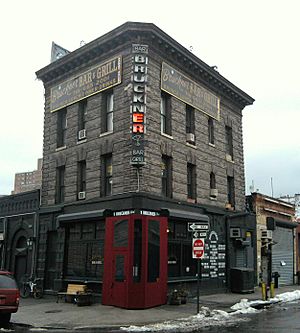 Bronx was named after the Swedish sea captain Jonas Bronck. In 1639, the Dutch West India Company purchased the land of today's Mott Haven from the Wecquaesgeek (groups of Lenape tribe). Bronck built his farm on this land and named it "Emmanus". The house was located close what is today the corner of Willis Avenue and 132nd Street.

The peace treaty between Dutch authorities and the Wecquaesgeek chiefs Ranaqua and Tackamuckwas was signed in Bronck's house. This event is portrayed in a painting by the American artist John Ward Dunsmore (1856–1945).

Even if Bronck only lived in the area for four years, the land became known as "Broncksland" and the river that bordered his land kept the name Bronck's River. The first time the spelling "Bronx land was used, was in 1697 in the First Legislature outlined the County of West Chester.

The area that is now called Mott Haven was sold to the Morris family in 1670. A small part of the larger swath of land known as Morrisania, it was purchased by Jordan Lawrence Mott for his iron works in 1849. A vestige of the iron works can be seen just west of the Third Avenue Bridge on East 134th Street at St. Ann's Church (ECUSA) on St. Ann's Avenue is the resting place of Lewis Morris, Gouverneur Morris and other members of that powerful colonial family, and a Registered Historic Place.

As the city below grew, the area quickly developed residentially. At the same time, an upper-middle class residential area, marked by brownstones built in an elaborate and architecturally daring fashion, started to grow along Alexander Avenue by the 1890s (Doctors' Row, aka the Irish Fifth Avenue). A series of brownstones on E. 134th St, east of Willis Ave., was known as Judges' Row. Soon after, the Bronx grew more quickly, especially with public transit into the area, including the IRT Ninth Avenue Line. By the early 20th century, the population density of the area supported the construction of many tenement-style apartment buildings.

From the end of the 19th century through the 1940s, Mott Haven was a mixed German-American (north of E. 145th St.) and Irish-American neighborhood (south of E. 145th St), with an Italian enclave west of Lincoln Ave.

One of the largest parades in New York City took place here in the late 1940s and early 1950s. It was organized by the veterans of the Irish Republican Army, who marched every Easter Sunday, down Willis Avenue from the Hub to E. 138th Street, then west to St. Jerome's. The Star of Munster Ballroom at the northeast corner of Willis Avenue and E. 138th Street was a center of Irish music for decades. It was speculated at one time that there were more bars on Willis Avenue than on any other city street, given its short length. More recorded Irish musicians lived in Mott Haven than in any place outside Ireland.

The first Puerto Rican settlements came in the late 1940s along the length of Brook Avenue. African-Americans came into the area when Patterson Houses were built. 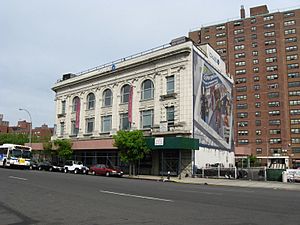 North Side Board of Trade 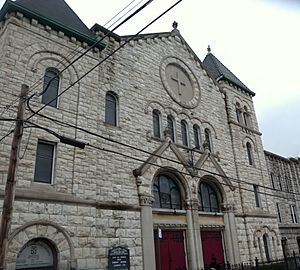 Mott Haven and Port Morris were the first neighborhoods to give rise to the term "South Bronx". Together, they were earlier known as the North Side or North New York. This area was part of New York County after the incorporation of Greater New York in 1898. The Chase Manhattan Bank at Third Avenue and E. 137th Street was originally the North Side Board of Trade Building (1912). It later became the North Side Savings Bank, which became Dollar Dry Dock, which became Chase.

In the 1940s when the Bronx was usually divided into the East Bronx and West Bronx, a group of social workers identified a pocket of poverty on East 134th Street, east of Brown Place, and called it the South Bronx. This area of poverty would spread in part due to an illegal practice known as blockbusting and to Robert Moses building several housing projects in the neighborhood. The poverty greatly expanded northward, following the post-war phenomenon colloquially referred to as white flight, reaching a peak in the 1960s when the socioeconomic North Bronx-South Bronx boundary reached Fordham Road. At this time a wave of arson destroyed or damaged many of the residential, commercial, and industrial structures in the area.

Today the North Bronx-South Bronx distinction remains more common than the traditional East Bronx-West Bronx distinction, and some still regard Fordham Road as the boundary. Though crime has declined versus the highs of the crack epidemic and revitalization of former abandoned properties is taking place, the neighborhood continues to deal with serious crime issues, which some speculate is due to persistent poverty among the population.

There have been significant strides to increase gentrification of the neighborhood, and the most changes are seen on Bruckner Boulevard, Alexander Avenue, and Lincoln Avenue. E. 138th Street has seen minor changes with apartment buildings under new renovations, and the arrival of new businesses. Mott Haven is home to a community-supported agriculture program hosted at Brook Park. 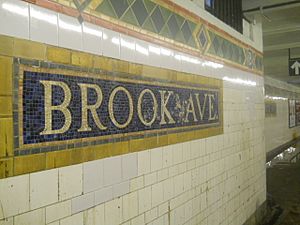 A mosaic along the platform of Brook Avenue station on the IRT Pelham Line. 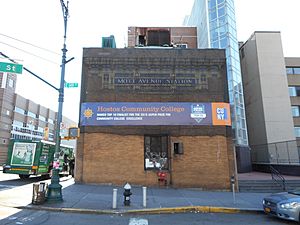 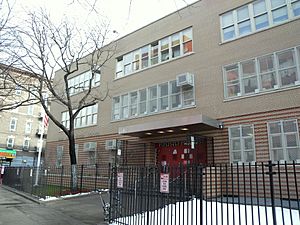 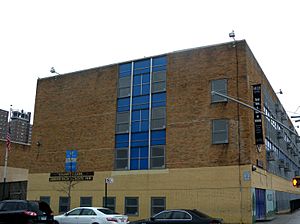 The New York Public Library operates the Mott Haven branch at 321 East 140th Street. The branch, a Carnegie library, opened in 1905 and is a New York City designated landmark.

All content from Kiddle encyclopedia articles (including the article images and facts) can be freely used under Attribution-ShareAlike license, unless stated otherwise. Cite this article:
Mott Haven, Bronx Facts for Kids. Kiddle Encyclopedia.