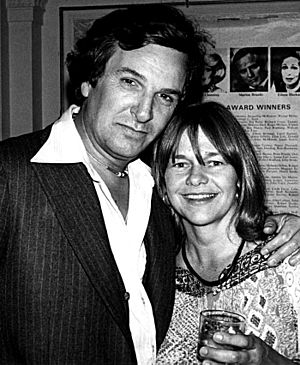 With actress Estelle Parsons in 1977

Daniel Louis Aiello, Jr. (June 20, 1933 – December 12, 2019) was an Italian-American actor. He was in many movies. These include Once Upon a Time in America, Ruby, The Godfather: Part II, Hudson Hawk, The Purple Rose of Cairo, Moonstruck, Léon: The Professional, Two Days in the Valley, and Dinner Rush. He is most famous for his role in the 1989 Spike Lee movie Do the Right Thing.

Aiello was nominated for a "Best Supporting Actor" Academy Award in 1990 for his role as Sal, the pizzeria owner. He won an Emmy Award in 1981.

Aiello was born in New York City. He died on December 12, 2019, at the age of 86 at a hospital in New Jersey. He had an infection caused by medical treatment.

All content from Kiddle encyclopedia articles (including the article images and facts) can be freely used under Attribution-ShareAlike license, unless stated otherwise. Cite this article:
Danny Aiello Facts for Kids. Kiddle Encyclopedia.