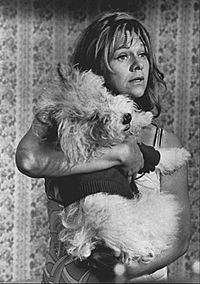 Estelle Margaret Parsons (born November 20, 1927) is an American actress, singer and stage director. She worked for the television program Today and first appeared on stage in 1961.

She won an Academy Award for Best Supporting Actress for her role in Bonnie and Clyde, and for Rachel, Rachel was nominated with the same award. She later became known on television for her role as Beverly Harris in the sitcom Roseanne.

Parsons was born in Lynn, Massachusetts. She was married to Richard Gehman in 1953, before divorcing in 1958. The couple had twin daughters. She married Peter Zimroth in 1983 and have one son.

All content from Kiddle encyclopedia articles (including the article images and facts) can be freely used under Attribution-ShareAlike license, unless stated otherwise. Cite this article:
Estelle Parsons Facts for Kids. Kiddle Encyclopedia.