Longwood is an urban, mixed use, primarily residential neighborhood geographically located in the southwest Bronx, New York City. The neighborhood is part of Bronx Community Board 2. Its boundaries, starting from the north and moving clockwise are East 167th Street to the north, the Bronx River and the Bruckner Expressway to east, East 149th Street to the south, and Prospect Avenue to the west. Southern Boulevard is the primary thoroughfare through Longwood. The local subway is the 6 <6> trains, operating along Southern Blvd. ZIP codes include 10455 and 10459. The neighborhood is served by the New York City Police Department's 41st Precinct. NYCHA property in the area is patrolled by P.S.A. 7 at 737 Melrose Avenue in the Melrose section of the Bronx. 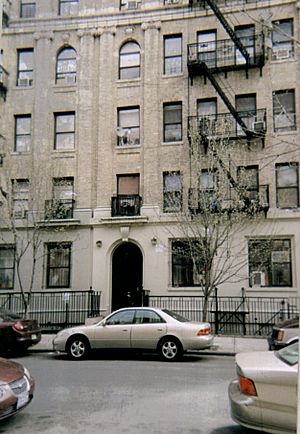 976 Simpson Street was built in 1909. It is near the former "Fort Apache" precinct house 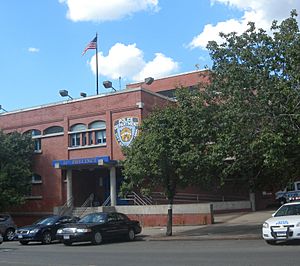 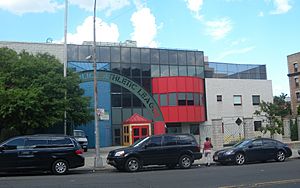 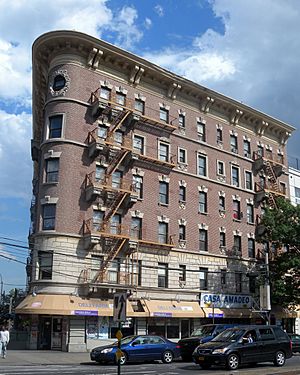 The Bronx initially began to become urban with the construction of a street-car network. Eventually, the expansion of the elevated and subterranean rapid transit lines from Manhattan rapidly accelerated development. Solid rows of 5 and 6 story, walk-up and larger elevator, apartment buildings were built to the sidewalk and dominated the landscape of Upper Manhattan, the West Bronx and in walking proximity of the elevated lines in the East Bronx. Commercial corridors quickly developed in close proximity to rapid transit stations and primary thoroughfares. Early in this construction boom, Longwood was one of the most dense and developed Bronx neighborhoods. For much of the first half of the 20th Century, the borough of the Bronx was home to a predominantly middle class, White, European descent, Jewish population. Still, there was great diversity. Immigrants of varying socioeconomic status from a number of countries, but mostly European.

Beginning in the 1950s, the older, more developed parts of the Bronx experienced a socioeconomic shift due to a number of factors. The construction of the Cross Bronx Expressway displaced thousands and physically divided communities, Co-op City in the northeast Bronx offered modern amenities and spacious apartments, and suburban communities outside New York City became more appealing with their auto-centric lifestyle. As people with financial means began to leave, poverty stricken often replaced them. White flight and abandonment only accelerated over time. By the late 1970s, many buildings in the greater South Bronx had been burnt out in an epidemic wave of arson. Scammers realized they could manipulate the system and collect insurance money after more lucrative tenants had fled. The area was severely run down as the community became increasingly disfranchised. At this time, crime reached such a level that the 41st Precinct Station House at 1086 Simpson Street became known by the police as "Fort Apache", as was later immortalized in a 1981 movie named for it.

The wave of arson eventually ended with the help of community groups such as Banana Kelly CIA, Inc. and SEBCO (South East Bronx Community Organization), who worked to bring recognition and protect the remaining apartment buildings in the greater South Bronx. What was left was a wasteland of abandoned buildings, vacant lots, filthy streets and a severe lack of even basic commercial amenities. During this period of time, the neighborhood was dealt another blow as violent crime hit historic highs during the crack epidemic. The police seemed to be fighting a losing battle as thousands of young men in New York City were regularly being killed on the streets over drug turf. The greater South Bronx was one of the hardest hit areas, with a largely poor population which lacked local jobs, many began to turn to the lucrative drug trade.

Some of the first federal funding in decades for new investment began in 1986 under the Ed Koch administration. In blighted neighborhoods across the city, various housing experiments were attempted. The NYCHA was one of the first agencies to create and renovate residential units in Longwood, the city soon followed up with independent, locally driven developments. This construction resulted in escalating reinvestment in these communities Continuing into the mid-1990s, local and federal governments invested over $550 million in new subsidized residential housing and the expansion of businesses and commerce. With the building of the South Bronx headquarters of P.A.L.; the relocation of the 41st Precinct of the NYPD from Simpson Street to Longwood Avenue; the Banana Kelly High School; and several small and large businesses (such as Rite Aid and McDonald's). This investment has only increased exponentially since that time. A vast number of new housing and commercial units have been constructed on formally vacant lots, with more planned. A community once dominated by blight and disinvestment, is now towered over by modern apartment buildings, renovated pre-wars, and rows of attached row houses. Social problems persist due to a significant percentage of the population living in poverty. Crime, for instance, has declined versus historic highs in the 1990s, but remains well above the average for New York City. However, the neighborhood improved and has come a long way.

The neighborhood predominantly consists of Latin Americans (Longwood has one of the highest concentrations of Puerto Ricans in New York City) but includes a small yet diverse mix of races, ethnic groups, religious affiliations, sexual orientations, and national origins. Like most neighborhoods in New York City, the vast majority of households are renter occupied. Almost half of the population lives below the federal poverty line and receives public assistance (AFDC, Home Relief, Supplemental Security Income, and Medicaid). This community was once part of New York's 16th congressional district, the poorest such district in the United States. After redistricting, it is now part of New York's 15th congressional district and no longer the poorest district in the United States. There is significant income diversity on a block by block basis. 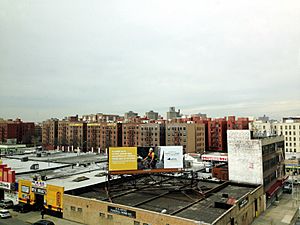 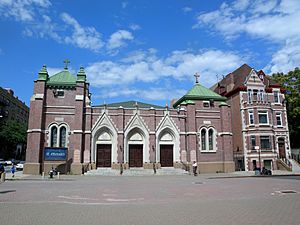 Longwood is dominated by pre-war, 5- and 6-story apartment buildings. Starting in the 1990s, a construction boom has resulted in a number of modern apartment buildings and row houses. Much of the original housing stock was structurally damaged by arson and eventually razed by the city between mid and late 1900s.

'The Crossings' is a two-level 40,000-square-foot (3,700 m2) mall being planned at the intersection of Hunts Point Avenue and Bruckner Boulevard which is slated to open sometime in 2016. It is notable for featuring the borough's second Red Lobster restaurant, the first being in Co-op City. Other notable tenants include Bank of America, Dunkin' Donuts and Deals. Initially, the project included a residential component, but was quickly scrapped, much to the dismay of the community.

The landmarked Longwood Historic District is located south of Longwood Avenue along Beck, Kelly, Dawson Streets and Hewitt Place. The district largely consists of semi-detached row houses, most of which were designed by one architect, Warren C. Dickerson.

There are four NYCHA developments located in Longwood.

All content from Kiddle encyclopedia articles (including the article images and facts) can be freely used under Attribution-ShareAlike license, unless stated otherwise. Cite this article:
Longwood, Bronx Facts for Kids. Kiddle Encyclopedia.