Clason Point is a peninsula in the East Bronx, New York City. The area includes a collection of neighborhoods including Harding Park, and Soundview. Its boundaries, starting from the north and moving clockwise, are: Lafayette Avenue to the north, White Plains Road/Pugsley Creek Park to the east, the East River to the south, and the Bronx River to the west.

Soundview Avenue is the primary thoroughfare through Clason Point. Soundview Avenue once stretched from White Plains Road and O'Brien Avenue in Harding Park to Westchester and Metcalf Avenues in Soundview-Bruckner before the construction of the Bronx River Parkway. It was then known as Clason's Point Road. The Bruckner Expressway which now bisects the area along the center was once known as Ludlow Avenue.

Soundview's total land area is roughly 1.3 square miles. It is racially diverse and has a mixture of moderate single family homes, low income buildings and expensive condominiums. Most buildings in this section have the same requirements as buildings in Co-op City.

The entirety of Community District 9, which comprises Clason Point and Parkchester, had 184,105 inhabitants as of NYC Health's 2018 Community Health Profile, with an average life expectancy of 79.7 years. This is about the same as the median life expectancy of 81.2 for all New York City neighborhoods. Most inhabitants are youth and middle-aged adults: 25% are between the ages of between 0–17, 29% between 25–44, and 24% between 45–64. The ratio of college-aged and elderly residents was lower, at 10% and 12% respectively. 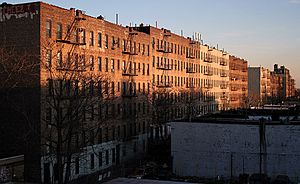 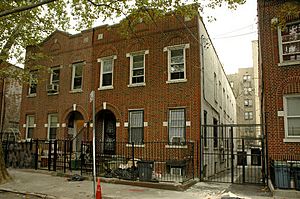 There are large, residential housing complexes of various types. These include public housing, high-rise co-ops and rentals. The neighborhood contains one of the highest concentrations of NYCHA projects in the Bronx. There are also 5 and 6 story, pre-war, apartment buildings primarily concentrated along the IRT Pelham Line El on Westchester Avenue and multi-unit row-houses located throughout the neighborhood. Starting in the 1990s, the construction of modern 2 and 3 unit row-houses and apartment buildings have increased the percentage of owners versus renters. The neighborhood's northern and eastern borders have a heavy concentration of commercial establishments. Westchester Avenue evolved into a mixed use, primarily commercial, district serving the greater area after the completion of the elevated IRT Pelham Line. Bruckner Plaza, which greatly expanded throughout the 1990s, contains big box stores like Toys R Us, K Mart, and Old Navy. Other primary thoroughfares contain limited but necessary amenities like supermarkets, pharmacies, barbershops, hair salons, fast food, bodegas, and cheap shops.

Soundview Park occupies a significant land area in the southwestern section of the neighborhood, with ballfields and playgrounds and a pedestrian/bike greenway along the left bank of the Bronx River estuary from Lafayette Avenue to Leland Avenue.

There are several NYCHA developments:

The small peninsula of the Bronx defined by the Bronx River, Pugsley's Creek, and the East River is known as Clason (pronounced Clawson) Point. However, it has had several names over the years. In ancient times, the Bronx River area to the West was known to the Siwanoys, who spoke Algonquian, as "Aquahung". The site of a large Native American settlement, comprising more than seventy dwellings, Clason Point was then known to natives as "Snakapins", or "Land By The Two Waters".

Europeans began settling the region in the early 17th century, and the Cornell family built the first permanent European settlement in the spit of land first known as Snakipins by the Indians. An English settler, Thomas Cornell, began farming here from 1643, for which the area became known as Cornell's Neck. He owned 2000 acres. During the Pig Wars the indians burned his farm and he narrowly escaped by boat. Later the area was known as Clason Point, named after Isaac Clason, a Scottish merchant and a major land owner. Development in the 19th century soon attracted resort seekers and the area became known for its amusements and entertainment. From 1883-1927, it was the site of the Clason Point Military Academy. In the 1640s a series of skirmishes between the Cornells and the Siwanoy, known as the Pig Wars, were led by Chief Wampage, the Siwanoy sachem believed to be the Indian leader who killed Anne Hutchinson and her children in 1643 at Split Rock, now in the northern Bronx. A passing ship rescued the Cornells, and they returned to their home the year after Wampage's last raid. Britisher Thomas Pell arrived at a treaty in 1654 with several Siwanoy sachems, including Wampage, that the Dutch authorities didn't recognize. This disagreement was rendered moot in 1664 when the British fleet appeared in the harbor and the Dutch capitulated.

Clason Point in the early 20th century was an era of trolley cars on the main thoroughfare, Soundview Avenue or, as it was then, Clason Point Road. Clason Point was a mixture of mansions, farmland and plenty of undeveloped fields and swampland. There were ferryboat and steamer excursions from "The Point" to downtown (Manhattan) as well as local service across the East River to College Point, Queens. The last boat to College Point terminated during World War II. The area was then known for dance halls, roller coasters, picnic groves and baseball games, as well as the world's largest saltwater outdoor swimming pool known as "The Inkwell." There was a volunteer fire department,a small airport, docks for sailboats and motorboats, saloons, and novelty shops. The amusement park rides and novelties in the Harding Park area of Clason Point was then known as "The Coney Island of the Bronx." A Ferris wheel on the amusement park was blown over in a 1922 windstorm.

By the middle 19th century Clason Point had many farmhouses, despite its poor drainage. Even today the main shopping area is fairly distant, along Story Avenue, the Bruckner Expressway and White Plains Road. Its seaside location and views attracted seaside resorts, dancehalls and amusement parks in the early 20th Century, served by a ferry from College Point, Queens. Kane's, a major saloon in the Clason Point area in the 1920s, featured Helen Kane, a singer who coined the phrase "Boop-oop-a-doop" and for which cartoon flapper Betty Boop was modeled. Baby Esther was a black woman who originally performed at the Cotton Club in Harlem and was actually the first flapper with the Betty Boop persona but Helen Kane was falsely credited at the time. After World War II, Kane's became the site for the Shorehaven Beach Club. The club was purchased by Soundview Associates, an investment group including Sylvester Stallone, and was to become the Shorehaven Condominiums, a gated community of 1,183 condominium townhomes. 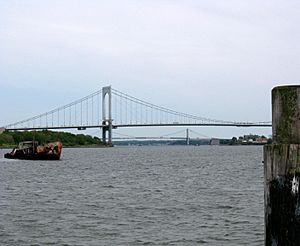 Looking east on an early afternoon from Clason Point Park 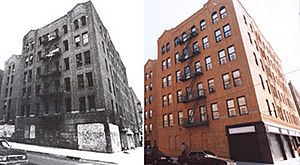 Before and after rehabilitation; the building is now low-income housing.

Until the 1940s, the neighborhood was relatively undeveloped. Most of the residential housing, primarily multi-unit rowhouses and tenement style apartment buildings, had been built near the El on Westchester Avenue and along major streets like Soundview Avenue (once served by a streetcar). In 1941 Clason Point Gardens was the first development constructed by the NYCHA in The Bronx. It was followed by many other low and high-rise NYCHA developments across the neighborhood from the 1950s until the 1970s, which boosted the population significantly. During the 1950s, two controlled-access highways, the Bronx River Parkway and Bruckner Expressway, were constructed. Later in the 1970s, large high-rise rental and co-op apartment complexes flourished across the neighborhood, under the badge of the Mitchell Lama program.

The area began to fall into rapid decay in the 1970s due to white flight, growing poverty rates, and a citywide fiscal crisis. Abandonment was a problem as the exodus picked up pace but much of the White non-Hispanic population was being quickly replaced by poor and working class Latin and African Americans. As a result, abandonment was less extensive than in neighborhoods to the west including Morrisania.

In more recent years, a citywide housing crisis spurred construction of modern multi-unit row houses and apartment buildings. Many of them are multi zoned for retail and have mixed-income qualifications. There have also been studies conducted to develop this type of housing on vacant land within the confines of NYCHA property along with significant renovations and improvements to existing grounds and buildings. Soundview Park, built on a former landfill and the largest in the South Bronx, has undergone a complete transformation including enhanced pedestrian access and completely renovated and redesigned recreational areas. Future plans in accordance with PlaNYC initiatives will create an urban oasis in this dense community; complete with recreation nodes, Greenway connections, bike/hike trails, designated fishing areas, a boat launch, and esplanades with skyline views. The neighborhood has become increasingly more diverse with a rise in varied Latin American immigration in recent years. Crime has also seen a significant decline as a result of a number of factors including enhanced policing techniques and changing economic demographics.

In the 21st century, the Harding Park section of Clason Point is known as Little Puerto Rico, with narrow streets and bungalow homes along the waterfront.

The infrastructure of the area has not been updated in many years. Many streets flood after periods of heavy rain. The nearest retail strip is almost a mile away. Public transportation is lacking and there are only a few schools in the neighborhood.

Nonprofit group Metropolitan Waterfront Alliance has been bolstering support to expand ferry service into the Bronx. In 2015, Mayor Bill de Blasio announced that by 2018, ferry service should begin operating in the neighborhood. 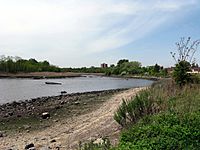 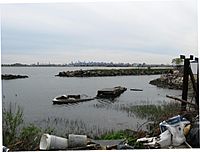 An artificial Lagoon at the south end of Soundview Park 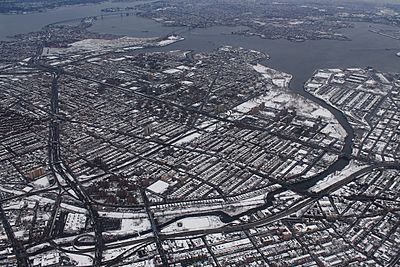 Aerial view of The Bronx which includes on Clason Point/Soundview.

The following public schools are located in Clason Point that are not also located in Soundview:

All content from Kiddle encyclopedia articles (including the article images and facts) can be freely used under Attribution-ShareAlike license, unless stated otherwise. Cite this article:
Clason Point, Bronx Facts for Kids. Kiddle Encyclopedia.