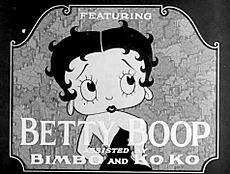 Betty Boop is an animated cartoon character created by Max Fleischer. She originally appeared in the Talkartoon and Betty Boop movie series. They were produced by Fleischer Studios and released by Paramount Pictures. She has also been featured in comic strips and mass merchandising.

Betty Boop was described in a 1934 court case as: "combin[ing] in appearance the childish with the sophisticated—a large round baby face with big eyes and a nose like a button, framed in a somewhat careful coiffure, with a very small body of which perhaps the leading characteristic is the most self-confident little bust imaginable".

She was first voiced by Margie Hines, but was popularly played by Mae Questel.

All content from Kiddle encyclopedia articles (including the article images and facts) can be freely used under Attribution-ShareAlike license, unless stated otherwise. Cite this article:
Betty Boop Facts for Kids. Kiddle Encyclopedia.