He was born to Vinzenz Hess and Serafine Edle von Grossbauer-Waldstätt, in Waldstein Castle, near Peggau in Styria, Austria on 24 June 1883. His father was a royal forester in Prince Louis of Oettingen-Wallerstein's service. He attended secondary school at Graz Gymnasium from 1893 to 1901.

From 1901 to 1905 Hess was an undergraduate student at the University of Graz, and continued postgraduate studies in physics until he received his PhD there in 1910. He worked as Assistant under Stefan Meyer at the Institute for Radium Research, Viennese Academy of Sciences, from 1910 to 1920.

Hess took a leave of absence in 1921 and travelled to the United States, working at the United States Radium Corporation, in New Jersey, and as Consulting Physicist for the US Bureau of Mines, in Washington, D.C. In 1923, he returned to the University of Graz, and was appointed the Ordinary Professor of Experimental Physics in 1925. The University of Innsbruck appointed him Professor, and Director Institute of Radiology, in 1931.

Hess relocated to the United States with his Jewish wife in 1938, in order to escape Nazi persecution. The same year Fordham University appointed him Professor of Physics, and he later became a naturalized United States citizen in 1944. His wife died of cancer in 1955. The same year he married Elizabeth M. Hoenke, the woman who nursed Berta at the end of her life.

He was a practicing Roman Catholic, and in 1946 he wrote on the topic of the relationship between science and religion in his article "My Faith", in which he explained why he believed in God. He retired from Fordham University in 1958 and he died on 17 December 1964, in Mount Vernon, New York from Parkinson's disease. 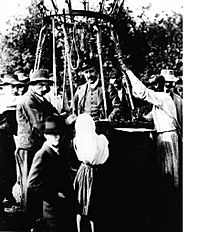 Between 1911 and 1913, Hess undertook the work that won him the Nobel Prize in Physics in 1936. For many years, scientists had been puzzled by the levels of ionizing radiation measured in the atmosphere. The assumption at the time was that the radiation would decrease as the distance from the earth, the source of the radiation, increased. The electroscopes previously used gave an approximate measurement of the radiation, but indicated that at greater altitude in the atmosphere the level of radiation might actually be higher than that on the ground. Hess approached this mystery first by greatly increasing the precision of the measuring equipment, and then by personally taking the equipment aloft in a balloon. He systematically measured the radiation at altitudes up to 5.3 km during 1911-12. The daring flights were made both at day and during the night, at significant risk to himself.

The result of Hess's meticulous work was published in the Proceedings of the Viennese Academy of Sciences, and showed the level of radiation decreased up to an altitude of about 1 km, but above that the level increased considerably, with the radiation detected at 5 km being about twice that at sea level.

His conclusion was that there was radiation penetrating the atmosphere from outer space, and his discovery was confirmed by Robert Andrews Millikan in 1925, who gave the radiation the name "cosmic rays". Hess's discovery opened the door to many new discoveries in particle and nuclear physics. Hess and Anderson shared the 1936 Nobel Prize in Physics.

All content from Kiddle encyclopedia articles (including the article images and facts) can be freely used under Attribution-ShareAlike license, unless stated otherwise. Cite this article:
Victor Francis Hess Facts for Kids. Kiddle Encyclopedia.