Kids Encyclopedia Facts
This page is about the American sportscaster. For the American art historian, see Vincent Scully. 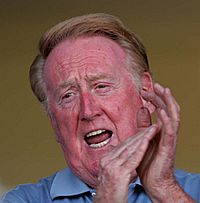 Hall of Fame broadcaster Vin Scully singing "Take Me Out to the Ballgame" during a spring training game in Arizona, 2008.

Vincent Edward "Vin" Scully (born November 29, 1927) is a veteran broadcaster with the Los Angeles Dodgers. His 63 seasons with the Dodgers (1950 – present) is the longest of any broadcaster with a single team in professional sports history. At the age of 25, Scully became the youngest man to broadcast a World Series game. He broadcast the 1953 World Series.

From 1975 to 1982, Scully announced the televised National Football League games for CBS Sports. Scully also added to the network's tennis and PGA Tour golf coverage in the late 1970s and early 1980s. He was NBC television's lead baseball broadcaster from 1983 to 1989.

The first biography of Scully's life, Pull Up a Chair: The Vin Scully Story, written by Curt Smith, was published in 2009.

As of 2012, Scully announces Dodgers' home games as well as road games in California, Arizona, and Colorado.

Scully has a star on the Hollywood Walk of Fame at 6675 Hollywood Blvd. Since 2001 the press box at Dodger Stadium has been named for Scully. A street near the team's former Dodgertown spring training facility in Vero Beach, Florida is named "Vin Scully Way".

Scully has been at some of Baseball’s most famous moments. He has made the calls that have since become part of the game's lore: 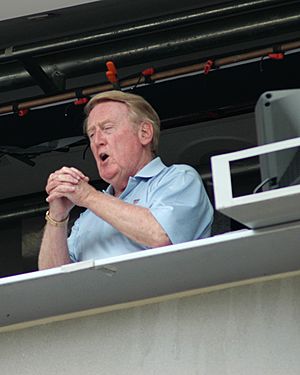 All content from Kiddle encyclopedia articles (including the article images and facts) can be freely used under Attribution-ShareAlike license, unless stated otherwise. Cite this article:
Vin Scully Facts for Kids. Kiddle Encyclopedia.