Donald Scott Drysdale (July 23, 1936 – July 3, 1993) was an American professional baseball player and television sports commentator. A right-handed pitcher for the Brooklyn Dodgers/Los Angeles Dodgers for his entire career in Major League Baseball, Drysdale was inducted into the Hall of Fame in 1984.

One of the most dominant pitchers of the late 1950s and early to mid 1960s, Drysdale stood 6 ft 5 in (1.96 m) tall and was not afraid to throw pitches near batters to keep them off balance. After his playing career, he became a radio/television broadcaster.

Drysdale was born in Van Nuys, Los Angeles, and attended Van Nuys High School, where one of his classmates was actor Robert Redford.

Pitching for the Brooklyn and Los Angeles Dodgers, he teamed with Sandy Koufax during the late 1950s and early and middle 1960s to form one of the most dominating pitching duos in history. Nicknamed "Big D" by fans, Drysdale used brushback pitches and a sidearm fastball to intimidate batters, similar to his fierce fellow Hall of Famer Bob Gibson. His 154 hit batsmen remains a modern National League record. 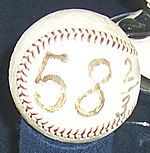 The ball thrown for the final out of Drysdale's 1968 consecutive scoreless innings streak.

In 1962, Drysdale won 25 games and the Cy Young Award. In 1963, he struck out 251 batters and won Game 3 of the World Series at Los Angeles' Dodger Stadium over the Yankees, 1–0. In 1965 he was the Dodgers' only .300 hitter and tied his own National League record for pitchers with seven home runs. That year, he also won 23 games and helped the Dodgers to their third World Championship in Los Angeles.

Drysdale ended his career with 209 wins, 2,486 strikeouts, 167 complete games and 49 shutouts. He was inducted into the Baseball Hall of Fame in 1984, and had his number 53 retired at Dodger Stadium on July 1, 1984. At the time of his retirement, Drysdale was the last remaining player on the Dodgers who had played for Brooklyn.

In 1965, Sandy Koufax declined to pitch the first game of the World Series because it was on Yom Kippur, a Jewish holy day. Drysdale pitched for the Dodgers instead of Koufax, giving up seven runs in 2+2⁄3 innings. When Walter Alston, the manager, came to the mound to remove him from the game, Drysdale said, "I bet right now you wish I was Jewish, too." The Dodgers lost the game to the Minnesota Twins 8-2 but went on to win the Series 4 games to 3.

Drysdale and Koufax took part in a famous salary holdout together in the spring of 1966, with both finally signing contracts just before the season opened. Those contracts made them the first pitchers to earn more than $100,000 a year.

A chronically sore shoulder forced Drysdale to retire during the 1969 season. The next year, he started a broadcasting career that continued for the rest of his life.

Drysdale conducted all of the National League player interviews for the Baseball Talk series in 1988 (Joe Torre did the same for the American League). 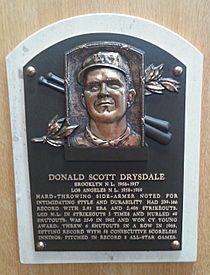 Don Drysdale's plaque at the Baseball Hall of Fame

In 1958, Drysdale married Ginger Dubberly, a native of Covington, Georgia, and a former Adrian fashion model. The couple had a daughter, Kelly, but divorced in 1982. On November 1, 1986, he married basketball player Ann Meyers, who took the name Ann Meyers-Drysdale. Drysdale and Meyers had three children together: Don Junior ("DJ") (son), Darren (son), and Drew (daughter).

In 1990, Drysdale published his autobiography, Once a Bum, Always a Dodger.

Drysdale was 56 when he died of a heart attack at Le Centre Sheraton in Montreal, Quebec, on July 3, 1993. Radio station employees were sent to look for him when he did not appear for the bus ride to Olympic Stadium, where the Dodgers were scheduled to play the Montreal Expos. Hotel staff found him in his room.

All content from Kiddle encyclopedia articles (including the article images and facts) can be freely used under Attribution-ShareAlike license, unless stated otherwise. Cite this article:
Don Drysdale Facts for Kids. Kiddle Encyclopedia.