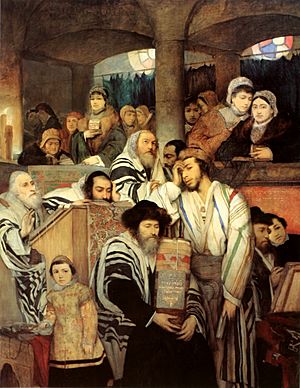 Praying in the Synagogue on Yom Kippur is a painting by Maurycy Gottlieb, done in 1878. 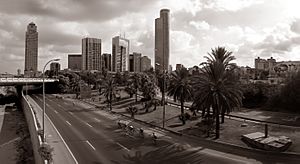 A highway that is normally busy in Tel Aviv, on Yom Kippur

Yom Kippur is a Jewish festival. It is also known as the Day of Atonement. It lasts 25 hours. During this period, Jews ask God to forgive them for all their sins. People fast on this day, and they go to synagogue. Other things people are not allowed to do during Yom Kippur include washing, using perfumes and lotions. Many wear white as a symbol of purity. Even though people fast, Yom Kippur is considered a happy holiday. This is because Jews are sure that God will forgive them on this day.

Yom Kippur is the tenth day of the month of Tishrei in the Hebrew calendar. In Jewish tradition, God writes the fate of each person for the coming year into a "book" on Rosh Hashanah. God waits until Yom Kippur to "seal" the book. During the days between Rosh Hashanah and Yom Kippur, Jews try to improve their behavior. They ask God to forgive them for sins against God (Vidui). At the end of Yom Kippur, Jews consider themselves absolved by God.

Yom Kippur is one of the holiest of Jewish holidays. It is observed by many Jews who do not observe other holidays. More people come to synagogue on Yom Kippur than on any other day of the year.

All content from Kiddle encyclopedia articles (including the article images and facts) can be freely used under Attribution-ShareAlike license, unless stated otherwise. Cite this article:
Yom Kippur Facts for Kids. Kiddle Encyclopedia.