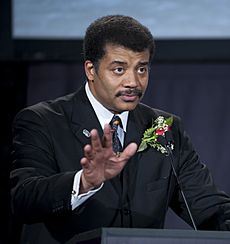 Neil deGrasse Tyson (/ˈdəˈɡræs/; born October 5, 1958) is an American astrophysicist, author, and science communicator. He is currently the Frederick P. Rose Director of the Hayden Planetarium at the Rose Center for Earth and Space and a research associate in the department of astrophysics at the American Museum of Natural History.

Tyson was born in the borough Manhattan of New York City, New York. He graduated from The Bronx High School of Science. He received his Bachelor of Arts degree in Physics from Harvard University. He earned his doctorate degree in Astrophysics from Columbia University. He lives in Lower Manhattan with his wife and two children.

In December 2018, Tyson was accused on sexual misconduct by many female former students. He said that the allegations were not true, but Fox and National Geographic announced that they would launch an investigation into the matter.

All content from Kiddle encyclopedia articles (including the article images and facts) can be freely used under Attribution-ShareAlike license, unless stated otherwise. Cite this article:
Neil deGrasse Tyson Facts for Kids. Kiddle Encyclopedia.