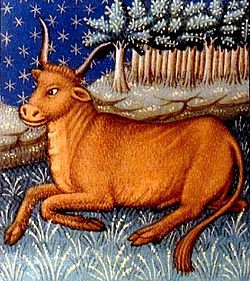 Taurus is an astrological sign, which is with the constellation (a group of stars that make the shape of an animal or person) of the same name. Under the tropical zodiac, Taurus is occupied by the Sun from April 20 to May 20, and under the sidereal zodiac, it is currently from May 14 to June 19.

In mythology, Taurus is often with the Greek myth of the bull-form taken by Zeus in order to win Europa. Taurus is also associated with the Greco-Roman goddess Aphrodite/Venus and sometimes also the goddesses Hera/Juno, Ishtar, Isis, Freyja, and Frigg and the gods Pan, Dionysus/Bacchus, Xolotl, and Quetzalcoatl.

All content from Kiddle encyclopedia articles (including the article images and facts) can be freely used under Attribution-ShareAlike license, unless stated otherwise. Cite this article:
Taurus (astrology) Facts for Kids. Kiddle Encyclopedia.