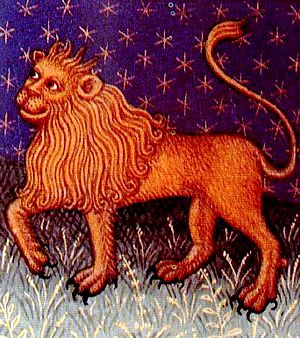 ♌) is the fifth astrological sign of the Zodiac, starting from the constellation of Leo. Leo is considered to be a "masculine", positive (extrovert) sign. It is also considered a fire sign and is one of four fixed signs ruled by the Sun. Being the fifth sign of the zodiac, Leo has been associated with the astrological fifth house.

Individuals born when the Sun is in this sign are considered Leo individuals. The Sun is in Leo roughly from July 23 to August 22. Under the sidereal zodiac, it is currently there roughly from August 10 to September 15.

There are many variables that determine compatibility in astrology, such as birth dates, birth months, personalities, birth years, times of birth (specific), position of a sign within the Sun, the Moon, Stars, etc. The signs listed as compatible are a general guideline and reference to compatibility. The branch in astrology dealing with specific interpersonal compatibilities is called Synastry.

All content from Kiddle encyclopedia articles (including the article images and facts) can be freely used under Attribution-ShareAlike license, unless stated otherwise. Cite this article:
Leo (astrology) Facts for Kids. Kiddle Encyclopedia.