Libra is an astrological sign, related to the constellation Libra, in the Southern Hemisphere near Scorpius and Virgo. In the tropical zodiac, the Sun meets Libra from September 23 to October 23, and in the sidereal zodiac, it ends on November 15. Libra, (The Scales of Balance), is the only symbol of the zodiac that is inanimate (it is not represented by an animal or person). The opposite sign to Libra is Aries.

The corresponding month in the Babylonian calendar is Tišritum, made for Shamash (the Sun). 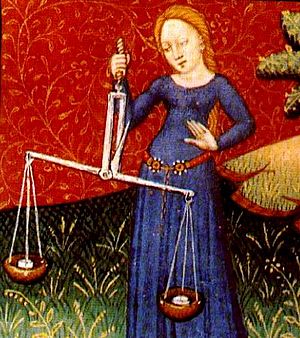 Libra's symbol, the scales, is the only symbol in the zodiac that is not represented by an animal or person.

In mythology a Libra is related to the Greek Goddess of Justice, Themis, the Greek mythology version of Atalanta (meaning balanced), and Astraea (daughter of Themis), who went up to heaven and became the constellation of Virgo, and carried the scales of justice, which is the constellation Libra.

Libra is also related to the Greco-Roman goddess Aphrodite/Venus and sometimes also the goddesses Eris/Discordia & Hermione/Concordia, Hera/Juno, Ishtar, Freyja, and Frigg and the god Xolotl.

Astrologers broadly agree that the following are the characteristics of Libra:

In astrology Libra is ruled by the planet Venus. The Indian version of Libra is Tula, the Chinese version is the Dragon.

People born in Libra are said to be good in jobs to do with human relationships and a harmonious (social) place is very important for them; for example places for an artist, poet, diplomat, social worker, fashionable people with cosmetics.

In medical astrology and anatomy, Libra rules any part in the body to do with excretion, for example the kidneys, skin, lumbar region, buttocks, adrenals and vasomotor system, and lumbar vertebrae.

All content from Kiddle encyclopedia articles (including the article images and facts) can be freely used under Attribution-ShareAlike license, unless stated otherwise. Cite this article:
Libra (astrology) Facts for Kids. Kiddle Encyclopedia.