Leo is one of the constellations of the zodiac. Its name is Latin for lion. Its symbol is

( ♌). Leo lies between dim Cancer to the west and Virgo to the east.

Regulus, Al Jabbah, and Algieba, together with the fainter stars ζ Leo (Adhafera), μ Leo (Ras Elased Borealis), and ε Leo (Ras Elased Australis), make up the pattern known as "the Sickle". These stars represent the head and the mane of the lion.

The carbon star CW Leo (IRC +10216) is the brightest star in the night sky at the infrared N-band (10 μm wavelength).

The Leo Ring is a cloud of hydrogen and helium gas. It is found in orbit of two galaxies found within Leo.

Many civilizations over thousands of years have portrayed the constellation of Leo as a lion. One theory for this is that the Sun was among its stars in Midsummer. This was the time when the lions of the Egyptian desert left their usual home for the banks of the river Nile. There they could find relief from the heat in the water. The Roman writer Pliny the Elder wrote that the Egyptians worshipped the stars of Leo. He says this is because the Nile would overflow with water at the same time as the Sun entering into the constellation.

In Egypt, the Ramesseum (the memorial temple of Pharaoh Ramesses II) at Thebes mentions Leo in the inscription on the wall. On the planisphere of Dendera Leo is shown standing on an outstretched serpent.

The Persians called Leo Ser or Shir; the Turks, Artan; the Syrians, Aryo; the Jewish, Arye; the Indians, Simha ; all meaning a lion. In Babylonian astronomy these stars were called UR.GU.LA - the 'Great Lion'; the bright star, Regulus, that stands at the Lion's breast also had distinctly regal associations as it was known as the King Star.

In Greek mythology, it was identified as the Nemean Lion which was killed by Hercules during one of his twelve labours, and after that put into the sky.

The Roman poet Ovid called it Herculeus Leo and Violentus Leo. Bacchi Sidus (Star of Bacchus) was another of its titles, the god Bacchus always being identified with this animal. However, Manilius called it Jovis et Junonis Sidus (Star of Jupiter and Juno).

Early Hindu astronomers knew it as Asleha and as Sinha, the Tamil Simham. 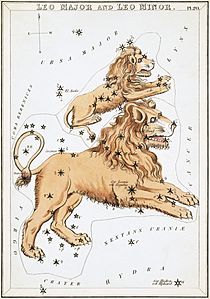 Leo, with Leo Minor above, as depicted in Urania's Mirror, a set of constellation cards published in London c.1825.

All content from Kiddle encyclopedia articles (including the article images and facts) can be freely used under Attribution-ShareAlike license, unless stated otherwise. Cite this article:
Leo (constellation) Facts for Kids. Kiddle Encyclopedia.