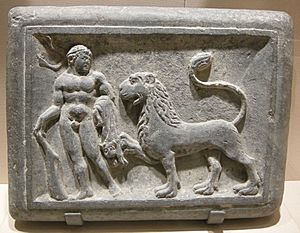 The Nemean lion (Greek: Λέων της Νεμέας Léōn tēs Neméas; Latin: Leo Nemaeus) was a vicious monster in Greek mythology that lived at Nemea. It was eventually killed by Heracles. It could not be killed with mortal weapons because its golden fur was impervious to attack. Its claws were sharper than mortal swords and could cut through any armor.

All content from Kiddle encyclopedia articles (including the article images and facts) can be freely used under Attribution-ShareAlike license, unless stated otherwise. Cite this article:
Nemean lion Facts for Kids. Kiddle Encyclopedia.