East Tremont is a residential neighborhood located in the West Bronx, New York City. From the north and moving clockwise, it is bounded by East 180th Street, Southern Boulevard, the Cross-Bronx Expressway and Third Avenue. East Tremont Avenue is the primary thoroughfare through the neighborhood.

The neighborhood predominately consists of Latin Americans (East Tremont has one of the highest concentrations of Puerto Ricans in New York City) and African Americans. There is a small but growing Dominican population. Almost half the population lives below the poverty line and receives public assistance (AFDC, Home Relief, Supplemental Security Income, and Medicaid). Most households are renter occupied. The entirety of Community District 6, which comprises East Tremont and Belmont, had 87,476 inhabitants as of NYC Health's 2018 Community Health Profile, with an average life expectancy of 77.7 years. This is lower than the median life expectancy of 81.2 for all New York City neighborhoods. Most inhabitants are youth and middle-aged adults: 29% are between the ages of between 0–17, 28% between 25–44, and 20% between 45–64. The ratio of college-aged and elderly residents was lower, at 14% and 9% respectively.

East Tremont is dominated by five and six story tenement buildings, older multi-unit homes, vacant lots, and newly constructed apartment buildings. Most of the original housing stock was structurally damaged by arson and eventually razed by the city. The land area, somewhat hilly, is less than one square mile.

There are two NYCHA developments located in East Tremont.

All are public schools. 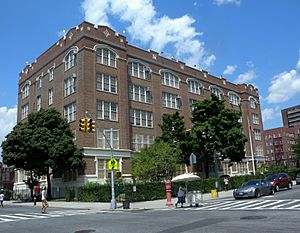 The New York Public Library operates the Tremont branch at 1866 Washington Avenue. The branch, a Carnegie library designed by Carrère and Hastings in the Italian Renaissance style, was opened in 1905.

All content from Kiddle encyclopedia articles (including the article images and facts) can be freely used under Attribution-ShareAlike license, unless stated otherwise. Cite this article:
East Tremont, Bronx Facts for Kids. Kiddle Encyclopedia.