Throggs Neck (also known as Throgs Neck) is a neighborhood and peninsula in the south-eastern portion of the borough of the Bronx in New York City. It is bounded by the East River and Long Island Sound to the south and east, Westchester Creek on the west, and Baisley Avenue and the Bruckner Expressway on the north.

The neighborhood is part of Bronx Community District 10, and its ZIP Code is 10465. Throggs Neck is patrolled by the 45th Precinct of the New York City Police Department. 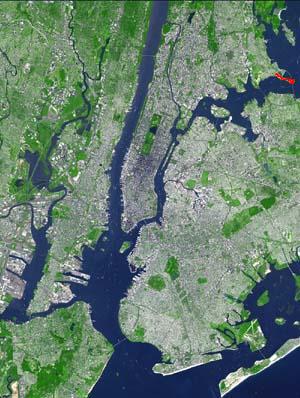 The geographic feature Throggs Neck, shown in red, in the Bronx

The peninsula was called Vriedelandt, "Land of Peace", by the New Netherlanders. The current name comes from John Throckmorton, English immigrant and associate of Roger Williams in Massachusetts and Rhode Island. The Dutch allowed Throckmorton to settle in this peripheral area of New Amsterdam in 1642, with thirty-five others. At this time, the peninsula was also known as Maxson's point as the Maxson family (Richard, Rebecca, John, etc.) lived there. Many of the settlers, including Anne Hutchinson and her family, were murdered in a 1643 uprising of Native Americans. Throckmorton returned to Rhode Island. In 1668, the peninsula appeared on maps as "Frockes Neck". The peninsula was virtually an island at high tide.

In 1776, George Washington's headquarters wrote of a potential British landing at "Frogs Neck". At the bridge over Westchester Creek, now represented by an unobtrusive steel and concrete span at East Tremont Avenue near Westchester Avenue, General Howe did make an unsuccessful effort to cut off Washington's troops in October 1776; when the British approached, the Americans ripped up the plank bridge and opened a heavy fire that forced Howe to withdraw and change his plans; six days later he landed troops at Rodman's Neck to the north, on the far side of Eastchester Bay. A farm in the area owned by the Stephenson family was sold in 1795 to Abijah Hammond, who built a large mansion (later the offices of the Silver Beach Garden Corporation).

In the 19th century, the area remained the site of large farms, converted into estates. About 1848 members of the Morris family purchased a large parcel of land and built two mansions and many cottages and service buildings, reached by a private dock in Morris Cove at the end of what is now Emerson Avenue, where they had nearly a mile of shoreline. After the Civil War, Collis P. Huntington, the railroad builder, owned an extensive parcel, which his heirs held until they were almost the last estate on Throggs Neck. Huntington's property was previously owned by Frederick C. Havemeyer Jr., the sugar magnate, and the Havemeyer-Huntington mansion is now home to Preston High School, New York.

Throgs Neck Park, a 0.44 acres (0.18 ha)* public park that faces Throggs Neck from the opposite shore at the end of Myers Street, was acquired as a public place in 1836. From 1833 to 1856, the construction of Fort Schuyler brought in laborers and craftsmen, many of whom were immigrants from Ireland, to settle in the area with their families. By the late 19th century, the area had developed into a fashionable but more public summer resort, which also contained large German beer gardens, to which the residents of Yorkville arrived by steamboat service up the East River. The 19th-century steamboat landing at Ferris Dock on Westchester Creek stood at present-day Brush Avenue north of Wenner Place; the road to it bore the name of the steamboat Osseo. The Ferris family were 18th-century residents, whose Ferris Point at the southeast corner of the Throggs Neck neighborhood now supports the Hutchinson River Parkway (formerly Ferris Lane) overhead ramp to the Bronx-Whitestone Bridge and Ferry Point Park.

In the decades after the incorporation of the Bronx into the City of Greater New York in 1898, transit lines were extended to the neighborhood, bringing in many Italian farmers and tradesmen. In the 1920s the large estates largely became converted into smaller row homes and densely built bungalow lots. The Peters and Sorgenfrel families formed Silver Beach Garden (named for the color of the beach at low tide), a summer colony of bungalows that were later adapted for year-round use; most of the streets were named for flowers and trees found on the Hammond estate. Residents owned their houses but rented the land when they joined together to buy it. Nearby to the north, a campsite for church youth transformed into a bungalow colony later named Edgewater Park.

In 1932, Fort Schuyler closed as an active military installation and became the campus for cadets of the State University of New York Maritime College. A 1929–39 pair of plans to expand the subway system with a Second Avenue Subway branch to Throggs Neck did not come to pass. By 1961, with the construction of the Throggs Neck Bridge, as well as the adjacent parkways, the neighborhood lost its comparative isolation. 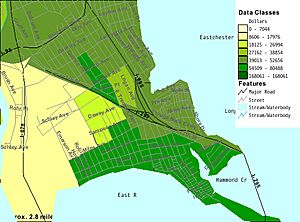 Map of the income distribution in Throggs Neck

The neighborhood has several beach clubs and a diverse housing stock, including middle-class homes, up-market waterfront condominiums, as well as the Throggs Neck Houses, built in 1953 as one of the first low-income public housing projects in New York City and later expanded twice. In 1984, the New York Times described Throggs Neck as one of the last middle- and upper-middle-class areas in the Bronx, noting the area "seems like a well-kept suburb." Even in the mid-1980s, after the city failed to pave neighborhood streets properly, waterfront condominiums were selling for as much as $416,468 in 2005 dollars. As of the 2000 Census, the median household income for census tracts within the neighborhood ranged from $18,000 to $85,000 in the less affluent tracts and well over $100,000 for the waterfront tracts near the Throgs Neck Bridge.

The entirety of Community District 10, which comprises City Island, Co-op City, Country Club, Pelham Bay, Schuylerville, Throgs Neck and Westchester Square, had 121,868 inhabitants as of NYC Health's 2018 Community Health Profile, with an average life expectancy of 81.1 years. This is about the same as the median life expectancy of 81.2 for all New York City neighborhoods. Most inhabitants are youth and middle-aged adults: 20% are between the ages of between 0–17, 26% between 25 and 44, and 27% between 45 and 64. The ratio of college-aged and elderly residents was lower, at 9% and 18% respectively.

Numerous roadways near the southern end of Throggs Neck are named in honor of Union generals from the American Civil War, including Philip Kearny, John Reynolds, Carl Schurz, Thomas Meagher, and Benjamin Prentiss. Another roadway is named for James Longstreet, a Confederate general who, once the war had ended, embraced Reconstruction and consequently became the object of intense Southern opprobrium.

Several television shows and movies have been filmed in Throggs Neck, including these films: 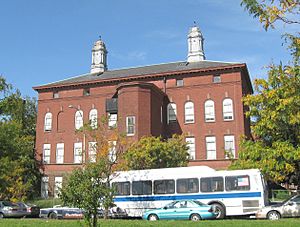 The following private schools are located in Throggs Neck:

The New York Public Library (NYPL)'s Throg's Neck branch is located at 3025 Cross Bronx Expressway Extension. The branch has operated since 1954 and moved to its current one-story building in 1974.

All content from Kiddle encyclopedia articles (including the article images and facts) can be freely used under Attribution-ShareAlike license, unless stated otherwise. Cite this article:
Throggs Neck Facts for Kids. Kiddle Encyclopedia.