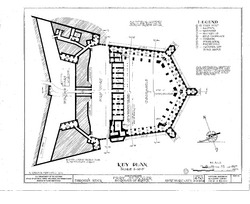 1934 drawing of Fort Schuyler, from the Historic American Buildings Survey 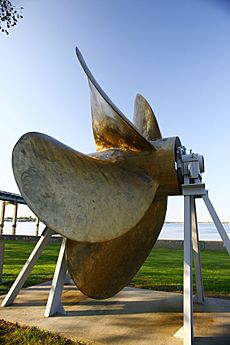 Propeller of the S.S. United States

Fort Schuyler is a preserved 19th century fortification in the New York City borough of the Bronx. It houses a museum, the Stephen B. Luce Library, and the Marine Transportation Department and Administrative offices of the State University of New York Maritime College. It is considered one of the finest examples of early 19th century fortifications. The fort was named in honor of Major General Philip Schuyler of the Continental Army.

Fort Schuyler was one of many forts built along the east coast of the United States under the third system of US fortifications in the aftermath of the War of 1812, when it became apparent that the U.S. coast was poorly defended against foreign invasion. Fort Schuyler was dedicated in 1856 after 75% completion. The fort was strategically positioned to protect New York City from naval attack through Long Island Sound, guarding the eastern entrance to New York Harbor. It is located on Throggs Neck, the southeastern tip of the Bronx, where the East River meets Long Island Sound. Fort Totten, built during the Civil War and largely incomplete, faces it on the opposite side of the river. Their interlocking batteries created a bottle-neck of defenses against ships attempting to approach New York City.

Fort Schuyler, at its peak, boasted 440 guns. Its position on Throggs Neck allowed four of its five sides to cover the water approach to New York City. The fort included an extensive hornwork and an advanced redoubt to defend against a land attack. Later, it would be fitted with various other pieces through the continuing modernization of coastal defense artillery, once including 10-inch and 12-inch guns on disappearing carriages installed on the hornwork and on the peninsula around the fort. Coastal artillery emplacements at the fort remained until 1935.

During the American Civil War, Fort Schuyler held as many as 500 prisoners of war from the Confederate States Army and military convicts from the Union Army. It also included the MacDougall Hospital, which had a capacity of 2,000 beds. The fort was well designed for its time, it is said to have had one of the most effective waste removal systems ever seen in a fort from this time period. During its active duty, not one man died from disease. 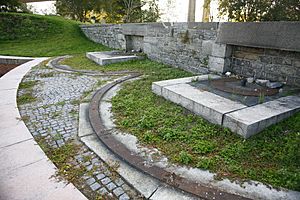 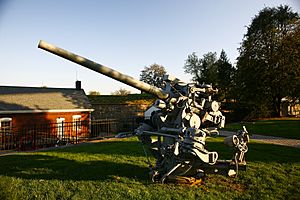 Duty at the fort was reported to be a dull assignment as the men took the roles of guards and hospital stewards, not artillerymen. From July until August 1865 the Fort was garrisoned by companies A, B, C, F, G, H and I of the Anderson Zouaves (companies D and E being assigned to Fort Wood on Bedloes Island), upon their return from service with the VI Corps of the Army of the Potomac and duty in the defenses of Washington, D.C. The Anderson Zouaves finally mustered out from Fort Schuyler on August 30, 1865.

A ten-gun battery was built 1873-1876 as part of a general fort improvement program, along with a mine casemate (bunker) for a controlled minefield in the river, Fort Totten being an experimental station for coast defense minefields. Later, Fort Schuyler received several modern gun batteries under the Endicott Program, completed 1898-1900 as part of the Harbor Defenses of Eastern New York, which also included new batteries at Fort Totten and Fort Slocum on Davids' Island. These included Battery Gansevoort with two 12-inch guns on disappearing carriages, Battery Hazzard with two 10-inch disappearing guns, Battery Bell with two 5-inch guns on retractable balanced pillar carriages, and Battery Beecher with two 3-inch guns on retractable masking parapet carriages. However, soon after completion the defenses of the East River were largely superseded by the Harbor Defenses of Long Island Sound, including Fort H. G. Wright on Fishers Island.

After the American entry into World War I in 1917, Battery Bell's 5-inch guns were removed for potential service in France on wheeled carriages. Most of the 5-inch guns removed under this program were sent to France with the 69th Coast Artillery regiment. However, the regiment did not complete training before the Armistice and did not see action. The 5-inch guns were never returned to the forts and were scrapped circa 1920. At some time, probably in 1918-1920, a battery of two 3-inch antiaircraft guns was built at the fort. In 1920, with the war over, Battery Beecher's 3-inch guns were scrapped as part of a general removal from service of the M1898 3-inch gun. The 10-inch guns of Battery Hazzard followed in 1930; the reason for this is unclear. In 1934 the fort was disarmed and turned over to the state. All of the Endicott-era batteries were demolished in the 1950s.

In the late 1920s Fort Schuyler was placed on the abandoned list by the U.S. Army. When this was done, it was targeted for acquisition by Robert Moses for conversion to a state park as well as a permanent shore base for the New York State Merchant Marine Academy (now SUNY Maritime College). A protracted political struggle ensued, but eventually the academy forces prevailed. The site was then rehabilitated by the Works Progress Administration during the Great Depression and dedicated to the school in 1938. The college, which was founded in 1874, still occupies the site, and in 1948 was one of the original 29 founding schools to be incorporated into the State University of New York as the State University of New York Maritime College. The fort has been listed on the National Register of Historic Places since 1976.

See also: List of maritime museums in the United States

All content from Kiddle encyclopedia articles (including the article images and facts) can be freely used under Attribution-ShareAlike license, unless stated otherwise. Cite this article:
Fort Schuyler Facts for Kids. Kiddle Encyclopedia.