Castle Hill is a neighborhood located in the southeast section of the borough of the Bronx in New York City. Its boundaries are Waterbury Avenue and Westchester Avenue to the north, Westchester Creek to the east, the East River to the south, and White Plains Road to the west. Unionport is a subsection of Castle Hill, typically considered north of Lafayette Avenue.

The neighborhood predominantly consists of Latin Americans (a plurality having Puerto Rican and Dominican ancestry) and African Americans. 73% of residential units are renter-occupied. There is significant income diversity but the poverty rate is higher and median household income lower than the New York City average.

The entirety of Community District 9, which comprises Castle Hill, Clason Point, and Parkchester, had 184,105 inhabitants as of NYC Health's 2018 Community Health Profile, with an average life expectancy of 79.7 years. This is about the same as the median life expectancy of 81.2 for all New York City neighborhoods. Most inhabitants are youth and middle-aged adults: 25% are between the ages of between 0–17, 29% between 25–44, and 24% between 45–64. The ratio of college-aged and elderly residents was lower, at 10% and 12% respectively. 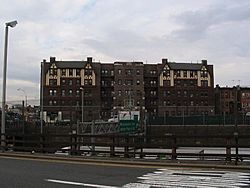 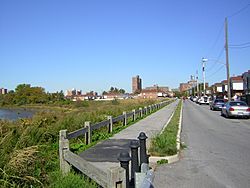 Castle Hill is dominated by multi-unit, 2 and 3 story homes and apartment buildings. In the 1990s and 2000s, construction of modern 2 and 3 unit row-houses and apartment buildings have increased the percentage of owners versus renters. There is also a slither of industry located along the Hutchinson River and Zerega Avenue. The area gradually comes to peak elevation along Castle Hill Avenue. The Castle Hill Avenue Business Improvement District was started with the assistance of Councilwoman Annabel Palma and James Vacca in June 2012.

Relatively undeveloped, the neighborhood began sprouting along the now defunct Castle Hill Avenue street-car system. Later, the neighborhood became more dense surrounding the construction of the Westchester Avenue Elevated. Castle Hill soon became home to many European immigrants looking for an alternative to the overpopulated immigrant communities found in Lower Manhattan. Traditionally an urban working-class neighborhood, an influx of lower-income earners and Latin American migrants beginning mid century diversified the income profile. Like most neighborhoods in NYC, the area went through a period of decay beginning in the 1950s and 1960s with a flight of moderate-income earners. The most severe flight occurred in the areas surrounding the Castle Hill Houses, a massive low-income public housing development. Since the late 1980s, and particularly since the 2000s, significant renewal has taken place. Many new residential and mixed use properties have been constructed and formally abandoned properties rehabilitated. For example, a New York City project to change the water pipes throughout the neighborhood has rejuvenated the area by rebuilding all sidewalks and renewing the asphalt in all of the streets.

The Bruckner Expressway, carrying Interstate 278, also runs through the neighborhood.

Scenes from the 1984 movie The Pope of Greenwich Village directed by Stuart Rosenberg were filmed under the Castle Hill stop on the #6 train and on the platform as well.

Castle Hill and Parkchester generally have a similar rate of college-educated residents to the rest of the city as of 2018[update]. While 23% of residents age 25 and older have a college education or higher, 30% have less than a high school education and 47% are high school graduates or have some college education. By contrast, 26% of Bronx residents and 43% of city residents have a college education or higher. The percentage of Castle Hill and Parkchester students excelling in math rose from 23% in 2000 to 44% in 2011, and reading achievement increased from 27% to 30% during the same time period.

The New York Public Library (NYPL) operates the Castle Hill branch at 947 Castle Hill Avenue. The branch opened in 1963 and moved to its current location in 1981.

All content from Kiddle encyclopedia articles (including the article images and facts) can be freely used under Attribution-ShareAlike license, unless stated otherwise. Cite this article:
Castle Hill, Bronx Facts for Kids. Kiddle Encyclopedia.