West Farms is a residential neighborhood in The Bronx, New York City. Its boundaries, are: Bronx Park to the north, the Bronx River Parkway to the east, the Cross-Bronx Expressway to the south, and Southern Boulevard to the west. East Tremont Avenue is the primary thoroughfare through West Farms.

West Farms has one of the highest concentrations of Puerto Ricans in New York City. Almost half the population lives below the poverty line and receives public assistance (AFDC, Home Relief, Supplemental Security Income, and Medicaid). The vast majority of households are renter occupied. Many households in the area are headed by a single mother which contributes to its high poverty rate. Many parents had children at a young age, and many West Farms families have been in poverty for generations. The incarceration rate in the area is also very high. In 2012, the 10460 zip code had the 17th highest number of incarcerated residents of any New York City zip code.

The entirety of Community District 6, which comprises West Farms and Belmont, had 87,476 inhabitants as of NYC Health's 2018 Community Health Profile, with an average life expectancy of 77.7 years. This is lower than the median life expectancy of 81.2 for all New York City neighborhoods. Most inhabitants are youth and middle-aged adults: 29% are between the ages of between 0–17, 28% between 25 and 44, and 20% between 45 and 64. The ratio of college-aged and elderly residents was lower, at 14% and 9% respectively.

West Farms is dominated by 5 and 6-story tenement buildings, older multi-unit homes, vacant lots, and newly constructed subsidized attached multi-unit townhouses and apartment buildings. Most of the original housing stock was structurally damaged by arson and eventually razed by the city. The total land area is less than one square mile. The terrain is somewhat hilly.

The West Farms Bus Depot is located along East 177th Street next to a terminated Sheridan Expressway; it opened on September 7, 2003 on the site of the former Coliseum Depot.

There are two NYCHA developments located in West Farms. 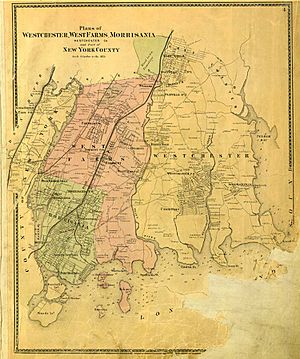 West Farms was separated from the town of Westchester, New York, by an act of the legislature in 1846, formed from the settlements of West Farms, Morrisania, and Fordham, which survive as recognizable neighborhoods of The Bronx to this day. The patent of the "West Farms", which were the farthest western section of Westchester, were granted by letters patent in 1666 to Edward Jessup and John Richardson, both of Westchester, who had jointly purchased it "of the Indyan proprietors". It was bounded on the east by the "river commonly called by the Indians Aquehung, otherwise Broncke river" Jessup was dead within a year, and his widow conveyed his share to Thomas Hunt of Westchester, whose family is commemorated in the name of Hunts Point. In 1711, the heirs of the patentees joined in a second division of the lands in twelve lots with immutable boundaries, which were subsequently divided up. During the American Revolution numerous engagements occurred here; there were too few able-bodied men to form a company of continental militia, so West Farms formed a joint company with Fordham.

In 1848 the village of West Farms was described as "pleasantly situated at the head of the navigable waters of the Bronx, three miles from the East river, and twelve from New York". Though it was rapidly increasing in size, it already had about 1000 inhabitants, in about 200 houses.There were three district schools, for boys and girls, and a ladies' seminary and a boys' private school. The railroad depot of the Harlem & Westchester Rail Road stood a mile north of the village, where there were four churches, "4 taverns, a temperance house, 12 stores of different kinds, and a post office." In addition to seven sloops moored on the Bronx River, there were manufactories: a Brussels carpet and spinning factory, another carpet manufactory, and a grist mill and a lumber mill, formerly de Lancey's Mills, converting the last stands of timber accessible to the Bronx River upstream. Rail service to the city was on an almost hourly schedule, and West Farms was developing into a railroad suburb like Yonkers, which bounded it on the north. In 1848 the Hunt house (built in 1688) still stood on Hunts Point at the end of "Planting Neck", and the high ground along the neck was dotted with villas. Poet Joseph Rodman Drake found inspiration in the views of Long Island Sound and is buried nearby. 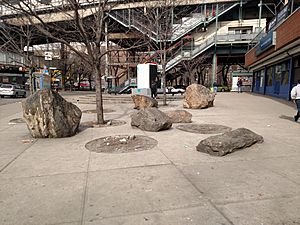 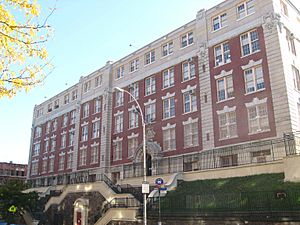 The New York Public Library operates the West Farms branch at 2085 Honeywell Avenue. The branch opened in 1929 and moved to its current location in 1954.

All content from Kiddle encyclopedia articles (including the article images and facts) can be freely used under Attribution-ShareAlike license, unless stated otherwise. Cite this article:
West Farms, Bronx Facts for Kids. Kiddle Encyclopedia.