Guayama (Spanish: [ɡwaˈʝama]), officially the Autonomous Municipality of Guayama (Spanish: Municipio Autónomo de Guayama) is a city and municipality on the Caribbean coast of Puerto Rico. As of the 2010 U.S. Census, the city had a population of 45,362. It is the center of the Guayama metropolitan area, which was home to 84,214 in 2010.

During the early years of the Spanish colonization, the region known today as Guayama was inhabited by Taíno Indians. The indigenous population in this area decreased due to slavery and migration to the Lesser Antilles. The following centuries, the region was under attack from the Taíno rebellion, Caribs and pirates. The town was founded on January 29, 1736 as San Antonio de Padua de Guayama by then Spanish Governor Matías de Abadía, although there is knowledge of it being populated by native Indians as early as 1567. Guayama took its name from an Indian leader, or cacique who governed the Southeastern region of the Island, the Guamaní cacique and the Guayama cacique. The meaning of the Indian name is "Great Place" (in Spanish Sitio Grande). It was Governor Don Tomás de Abadía who officially declared Guayama a "pueblo" (town) with the name of San Antonio de Padua de Guayama. That same year the Catholic Church in town, San Antonio de Padua, was declared a Parish. In 1776, Guayama had 200 houses, the church and a central plaza and the total population was approximately 5,000 villagers. Construction on Guayama's Parroquial church of San Antonio de Padua began in 1827 and was completed 40 years later. In 1828 the construction of the King's House (Casa del Rey) was completed and the church was rebuilt as well. Earlier that year, Guayama was hit by a terrible fire that destroyed 57 houses and 9 huts. Guayama territorial order was altered at different times through the years. Some of the most populated neighborhoods were segregated to form new towns. Patillas was established in 1811 as an independent municipality. In 1831, the territory comprised the neighborhoods: Algarrobos, Ancones, Arroyo, Carreras, Guayama Pueblo, Guamaní, Jobos, Machete, and Yaurel. Later, Arroyo was divided into Arroyo Este and Arroyo Oeste and neighborhoods emerged: Pozo Hondo, Palmas de Aguamanil, Caimital, Pitajayas, Cuatro Calles, Sabana Eneas, Palmas, and Salinas. The later had been segregated from Coamo.

In 1855, Arroyo was separated to become an independent municipality, taking the neighborhoods: Ancones, Arroyo, Yaurel, Pitajaya, and Cuatro Calles. By 1878, Guayama was a department head including: Comerío (then Sabana del Palmar), Cidra, Cayey, Salinas, Arroyo, San Lorenzo (then called Hato Grande), Aguas Buenas, Caguas, Gurabo, and Juncos. The development continued with the construction of the town cemetery in 1844, the slaughterhouse and meat market in 1851, and a wooden theater of two levels in 1878. By then Guayama had fourteen sugar plantations operating with steam engines and three with ox mills. Also practiced in this municipality was the exploitation of lead mines by the company "La Estrella", owned by Miguel Planellas, as well as the mineral galena, by the company "La Rosita", owned by Antonio Aponte. In 1881, Guayama is declared a Villa (First Order Municipality).

During the Spanish–American War, American forces under General Nelson A. Miles landed at Guánica near Ponce on July 25, 1898. The landing surprised the United States War Department no less than the Spanish, as Miles had been instructed to land near San Juan (the War Department learned of the landing through an Associate Press release.) However, en route to Puerto Rico Miles concluded that a San Juan landing was vulnerable to attack by small boats, and so changed plans. Ponce, said at the time to be the largest city in Puerto Rico, was connected with San Juan by a 70-mile military road, well defended by the Spanish at Coamo and Aibonito. In order to flank this position, American Major General John R. Brooke landed at Arroyo, just east of Guayama, intending to move on Cayey, which is northwest of Guayama, along the road from Ponce to San Juan. General Brooke occupied Guayama August 5, 1898, after slight opposition, in the Battle of Guayama. On August 9, the Battle of Guamaní took place north of Guayama. A more significant battle, the Battle of Aibonito Pass, was halted on the morning of August 13 upon notification of the armistice between the United States and Spain.

After the Spanish–American War, Guayama continued to develop. The Bernardini Theater built by engineer Manuel Texidor y Alcalá del Olmo opened in 1913. The venue, property of attorney Thomas Bernardini, was the scene for artists of international fame. By that time, Guayama was considered one of the most important cities on the island's social scene. 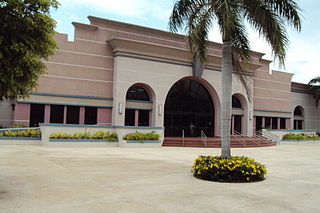 In the early twentieth century, there were selected societies such as the 'Coliseo Derkes' and 'Grupo Primavera', which endowed performing arts as well as scientific events. By the mid-twentieth century, Guayama achieved great industrial development, especially with the establishment of Univis Optical Corp., Angela Manufacturing Company and a petrochemical complex of the Phillips Petroleum Company. In 1968, the company started production of paraffin, benzene, synthetic fibers, nylon, plastic anhydrous, a million gallons of gasoline a day, and many other products. During that same decade agriculture began to decline as a result of land loss, industrialization and the construction of multiple housing developments. The urban growth affected the sugar cane industry. However, in 1974, 155,595 tons of sugar cane was harvested in the Municipality producing 12,655 tons of refined sugar.

In November 2002, AES Puerto Rico opened its coal power plant in Guayama. The company transmits and distributes electricity through a 25-year contract with the Puerto Rico Electric Power Authority. The 2012 National Puerto Rican Day Parade was dedicated to the Municipality of Guayama and its people. 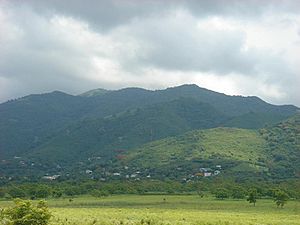 View of Guayama looking towards the "Cordillera Central" and Bosque de Carite.

The Municipality of Guayama is located on the Southern Coastal Valley region, bordering the Caribbean Sea, south of Cayey; east of Salinas; and west of Patillas and Arroyo. Guayama's municipal territory reaches the central mountain range to the north and the Caribbean Sea to the south. The mountain systems Sierra de Jajome (730 meters or 2,395 feet) and Sierra de Cayey cover some of the municipality area. The highest points are the Cerro de la Tabla (863 meters or 2,834 feet) and Cerro Tumbado (746 meters or 2,450 feet), which are part of the Sierra de Cayey mountain system. Other elevations are the mountains Garau, Charcas and Peña Hendida. Parts of the Guavate-Carite Forest and the Aguirre State Forest are in Guayama. The Guavate-Carite Forest, a 6,000-acre nature reserve is inhabited by 50 species of birds, making this spot a recognized area for birding and has a reserve with a dwarf forest that was produced by the region's high humidity and moist soil. The Aguirre Forest includes: mangroves, tidal flats, bird rookeries, research lakes & large manatee population. The Jobos Bay National Estuarine Research Reserve was established in 1987. The reserve is located between the coasts of Salinas and Guayama, approximately 2,883 acres of mangrove forest and freshwater wetlands. The two main components: Mar Negro mangrove forest, which consists of a mangrove forest and a complex system of lagoons and channels interspersed with salt and mud flats; and Cayos Caribe Islets, which are surrounded by coral reefs and seagrass beds, with small beach deposits and upland areas

The annual precipitation is approximately 52 inches and the average temperature is 81 °F. 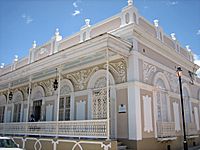 Guayama is the birthplace of numerous artists and musicians who have significantly influenced Puerto Rican culture. During the 20th century, the literature aspect of the city was influenced by performers including Afro-Antillano genre poet Luis Palés Matos and his father Vicente Palés Anés. Music composer Catalino "Tite" Curet Alonso who became a composer of over 2,000 salsa songs is also from Guayama, even though he was raised in the Santurce section of San Juan. Other performers born in Guayama include actresses Gilda Galán and Karla Monroig. The Casa Cautiño Museum is administered by the Institute of Puerto Rican Culture and include works of art, wood carvings, sculptures and furniture built by Puerto Rican cabinetmakers for the Cautiño family. The museum is listed on the National Register of Historic Places.

Guayama had one the Professional Baseball League foundingTeams. that team won the Championship the first years of the league, 1938–39 and 1939-40. Guayama has a baseball team (Brujos de Guayama) in the Federación de Béisbol Aficionado de Puerto Rico that won the national championship in 1987. Guayama also used to have a basketball team in the Puerto Rico's BSN (Brujos de Guayama) that went to the League finals twice back in 1991 and 1994 but lost both times to eventual champions Atleticos de San German, it was announced that the team will return for the league's 2012 season http://www.brujos2k12.com/. The Guayama Convention Center hosted some of the roller skating events for the 2010 Central American and Caribbean Games that took place in Mayagüez, Puerto Rico from July 18, 2010 to August 1, 2010. El Legado Golf Resort, a 285 acres, 18 hole golf course founded in 2002 by Puerto Rican golf player Juan "Chi-Chi" Rodriguez.

In terms of race and ethnicity, the 2010 U.S. Census stated the following concerning Guayameses:

The flag of Guayama is made up of three stripes of different colors: black, yellow, and red from top to bottom. The black stands for the enslaved Africans brought to Puerto Rico, many to Guayama. The yellow represents sugar cane industry in Puerto Rico and the significance of Guayama's sugar plantations. The red symbolizes the blood shed by Taíno Indians in their fight against the Spanish/European colonizers. To the left of the top stripe we can see the Old Mill, which today is known as the Molino de Vives.

The shield is divided in four parts and in two of them part of a chessboard appears. The chessboard pattern represents the center of the city, which resembles a chessboard. It has two old mill towers. The laurel trees constitute a representation of the beautiful Recreation Plaza very well known for its trimmed trees. The three silver flowers symbolize San Antonio de Padua, patron of Guayama. The crown represents Cacique Guayama, name of the town. The big crown has four towers.

All content from Kiddle encyclopedia articles (including the article images and facts) can be freely used under Attribution-ShareAlike license, unless stated otherwise. Cite this article:
Guayama, Puerto Rico Facts for Kids. Kiddle Encyclopedia.