Kids Encyclopedia Facts
This page is about the New York City parade. For the Seinfeld episode, see The Puerto Rican Day.

The parade marches along Fifth Avenue from 44th Street to 86th Street and has grown to become one of the largest parades in the United States, with nearly four million spectators annually by 2007. Although the largest Puerto Rican cultural parade is in New York City, other cities with large Puerto Rican populations, such as Philadelphia, Chicago, and Boston, also have notable Puerto Rican parades and festivals. 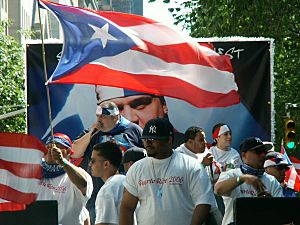 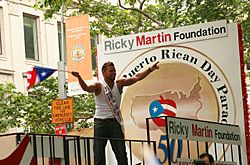 Ricky Martin as the parade's King in 2007

The first Puerto Rican Day Parade was held on Sunday, April 13, 1958, in Manhattan, replacing the former Hispanic Day Parade. This move, part of the mission of the Catholic Archdiocese of New York (esp., Cardinal Spellman and Ivan Illich) represented a shift away from earlier attempts at "Yankeefication" toward culturally specific expressions based on traditional fiestas patronales. In 1995, the parade became incorporated as the National Puerto Rican Day Parade and expanded beyond the parade venue itself. The parade now hosts over seven major events throughout the city.

There are dozens of other events that also take place the weekend of the parade that are not sponsored by the National Parade's corporation. One of the longest running is the street fair held one day prior to the parade. Though the size has changed over the years the heart of the parade has always been at 116th Street between Lexington and Second Avenues. In addition to the parade in New York City, there are currently over fifty smaller parades that take place throughout the United States.

The parade has attracted many New York politicians including mayor Michael Bloomberg, former mayor Rudy Giuliani, Governor Andrew Cuomo and Senator Charles Schumer, as well as many political candidates running for office and looking for voters in local, state and national elections. In recent years, the parade has honored several Puerto Rican celebrities by naming them "International Grand Marshal" of the parade including singer Marc Anthony, who participated in the parade along with his ex-wife Jennifer Lopez, and Ricky Martin in 2007 and 2010.

In addition to a National Grand Marshal, a variety of honorees are named for the parade, with titles such as "King", "National Ambassador of La Salsa", and "National Godmother". In June 2004, Puerto Rican rapper Ivy Queen was designated as the "Puerto Rico Youth Godmother" of the parade. Others to be given such titles include Wisin & Yandel and Willie Colón.

Following the parade on June 11, 2000, a number of women were harassed, robbed and sexually assaulted by mobs of young men in and about Central Park. The attacks, which were videotaped by onlookers, led to the arrest and prosecution of many of those involved. Manuel Vargas, a Dominican American who was a suspected ringleader, was quoted by the press as saying he "was just having fun." In 2007, the presence of gangs such as the Latin Kings, the Bloods and the Crips have been recorded at the event.

All content from Kiddle encyclopedia articles (including the article images and facts) can be freely used under Attribution-ShareAlike license, unless stated otherwise. Cite this article:
Puerto Rican Day Parade Facts for Kids. Kiddle Encyclopedia.