The town of Arroyo was officially founded on December 25, 1855. However, it is believed that there were previous settlements on the area even previous to the Spanish colonization. It is believed that the name of Arroyo (which means "creek" in English) is derived from a small water stream where travelers stopped to freshen up before continuing on their way.

It has been said that the town came to be formed when a small group of people from the neighbor town of Guayama came to the region looking for a port to export and import merchandise. Still, a local newspaper called La Gaceta de Puerto Rico published in 1868 that Arroyo was founded in 1852. Between 1859 and 1860, City Hall signed agreements to open streets and build a town square and a sewer system for the town.

In 1858, Samuel Morse introduced wired communication to Latin America when he established a telegraph system in Puerto Rico, then a Spanish Colony. Morse's oldest daughter Susan Walker Morse (1821–1885), would often visit her uncle Charles Pickering Walker who owned the Hacienda Concordia in the town of Guayama. During one of her visits she met and later married Edward Lind, a Danish merchant who worked in the Hacienda La Henriqueta in Arroyo. Lind purchased the Hacienda from his sister when she became a widow. Morse, who often spent his winters at the Hacienda with his daughter and son-in-law, set a two-mile telegraph line connecting his son-in-law's Hacienda to their house in Arroyo. The line was inaugurated on March 1, 1859 in a ceremony flanked by the Spanish and American flags. The first lines transmitted by Samuel Morse that day in Puerto Rico were:

"Puerto Rico, beautiful jewel! When you are linked with the other jewels of the Antilles in the necklace of the world's telegraph, yours will not shine less brilliantly in the crown of your Queen!"

Two decades after being founded, Arroyo had a population of 5,575. In 1902, Puerto Rico's Legislative Assembly approved a law to consolidate certain municipalities. According to it, Arroyo would be merged with Guayama starting in July 1 of that year. However, the law was revoked in 1905 returning Arroyo to its municipal status.

Arroyo belongs to the alluvial plains sub-region of Ponce-Patillas known as the Southern Coastal Valley. The area is very dry although its plains are productive thanks to artificial irrigation.

The Nigua River crosses the municipality from north to south. Its hidrographic system is completed by a series of smaller rivers. There is also a mineral water spring in the Virella Colony.

The municipality of Arroyo is made up of 5 Sectors 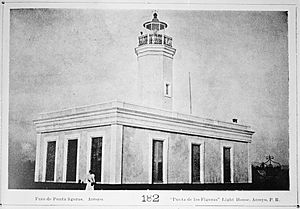 The people of Arroyo celebrate a wide variety of festivals during the year. For example, a traditional carnaval is held during the month of February. Also, the "Fiesta Negra", which celebrates the African heritage of the island, is held during March. The Fiestas patronales for Our Lady of Mount Carmel is held in July and the "Festival del Pescao" is celebrated in November.

Although Arroyo doesn't have a professional sports team, it has several amateur teams in Class A category.

Arroyo's flag has two horizontal bands of equal size. The upper band is color orange, while the lower one is black. In the middle of the flag lies Arroyo's coat of arms.

The coat of arms is also split in two sections. The upper section features a church in a blue field a church with a rosary to the right and a flower to the left. The lower section features two silver telegraph poles on green hills. At the bottom, waving stripes of blue and silver, with a fish below them. Above the shield, lies a crown of three towers filled in with purple. Below there's a banner with the motto, Arroyo Pueblo Grato. 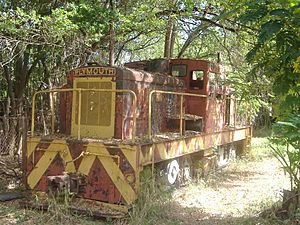 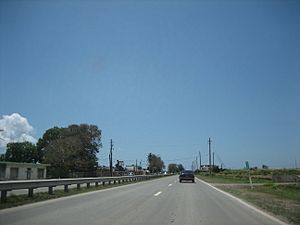 During the peak of the sugarcane industry in the island, Arroyo was part of the railroad system of the island, with trains hauling production to other municipalities in the island. A small portion of that train remained in use until recently for tourism purposes, under the name of Tren del Sur.

To reach Arroyo, visitors have to take the Puerto Rico Highway 3. However, there are other rural roads available to reach the municipality.

All content from Kiddle encyclopedia articles (including the article images and facts) can be freely used under Attribution-ShareAlike license, unless stated otherwise. Cite this article:
Arroyo, Puerto Rico Facts for Kids. Kiddle Encyclopedia.