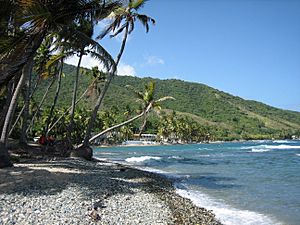 Patillas ( Watermelons) is a municipality of Puerto Rico located in the southeastern coast, south of San Lorenzo; west of Yabucoa and Maunabo; and east of Guayama and Arroyo. It is spread over 15 wards and Patillas Pueblo (the downtown area and the administrative center of the city). It is part of the Guayama Metropolitan Statistical Area.

As early as 1760 there were people already settled in Patillas however it was not a permanent settlement. During the mid-18th century there were a lot of people already living in Patillas. Patillas is along the southeastern coast of the island of Puerto Rico. During this time frame, there was an establishment of a sugar cane mill which took advantage of the agricultural potential the valley provided. As this establishment provided a good source of income for the neighbors it also was the main reason for the town's foundation in 1811. Doña Adelina Cintrón, owner of "La Finca Patillas", donated almost 8 acres (32,000 m2) of land for the foundation. Most of the neighbors then relocated towards the west side of the proposed site called Cacao Bajo.

The flag of Patillas has four green rectangles on the corners that symbolize the valleys and mountains of the town. These rectangles are separated by a golden cross symbolizing the fidelity towards the town's religious patron "El Santo Cristo de la Salud". Superimposed in the middle of the golden cross is an emerald, thus the nickname "La Esmeralda del Sur".

The art design of the flag was a creation of Pedro de Pedro in 1977. Each symbol on the flag was defined by Pedro J. Rivera Arbolay. The legal assessor was the attorney Roberto Beascochea Lota.

The coat of arms features a crow with a piece of bread in its beak, which represents the bird that saved the life to San Benito Abad, patron of the town, from being poisoned with a piece of bread. The castle with three windows symbolizes the captivity of Santa Barbara, matron of Patillas in the first years of the foundation and the devotion to the Holy Trinity. The cross represents Santo Cristo de la Salud. The two crossed machetes underneath the cross represent the peasants' struggle in the sugar cane plantations and the origins of economic development. The three towers in the superior part mean that Patillas is categorized as a town. The watermelon leaf, fruit that abounded in the west of Patillas, is the reason for the name of the town. The motto "Ora et Labora", means "Pray and Work"; motto of the religious order of San Benito Abad.

The name Patillas is originally an indigenous name for a native type of watermelon. The large abundance of this fruit in the area, along with the land donation from the original owner, lead to the town's name.

Despite being located in the region known as the Coast Valley of the South, a part of the town is mountainous. The Sierra de Cayey borders the town's territory through the northern region, and the Sierra de Guardarraya through the east.

There are several rivers and creeks that flow through the town of Patillas. There is also the Patillas Reservoir which was built in 1914. The Patillas and Marín Rivers flow into the reservoir which is also used for fishing.

The city of Patillas is itself sub-divided into several barrios (wards/districts):

Tourist sector is currently in development.

Patillas' Fiestas Patronales are held in August. Other traditional festivals held at the city are the Emerald of the South Carnival in May.

Emilio "Millito" Navarro (born September 26, 1905 in the city of Patillas, Puerto Rico) was the first Puerto Rican to play baseball in the Negro Leagues.

According to the 2000 census, Patillas has a population of 20,152 with a population density is 426.0 people per square mile (163.9/km²). Although there was a decline in the population during the 1960s and the 1990s, it has steadily increased during the last decade.

Puerto Rico is primarily made up of people of African and European descent with some claiming Asian and indigenous ancestry.. Statistics from the 2000 census shows that 67.7% of Patillences self identify as Spanish as in European or white origin which could include white American since the United States has had presence on the island since 1899 ; only 12.3% self identify as black or Afro Puerto Rican, even though Africans outnumbered Europeans during the early colonial period 0.5% self identify Amerindian]] etc.

Puerto Rico Highway 53 and Road #3 provide access to Patillas from the nearby city of Ponce. Patillas lies at about 1.25 hours from San Juan.

All content from Kiddle encyclopedia articles (including the article images and facts) can be freely used under Attribution-ShareAlike license, unless stated otherwise. Cite this article:
Patillas, Puerto Rico Facts for Kids. Kiddle Encyclopedia.