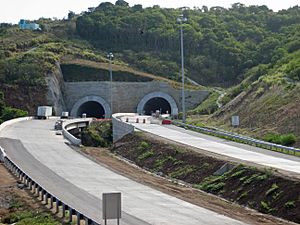 Maunabo is a municipality of Puerto Rico located in the southeastern coast, northeast of Patillas and south of Yabucoa. Maunabo is spread over 8 wards and Maunabo Pueblo (The downtown area and the administrative center of the city). It is part of the San Juan-Caguas-Guaynabo Metropolitan Statistical Area.

With an almost unspoiled culture—due to the high mountains that separate the town from the rest—Maunabo still is a very colonial city and the lack of large commercial chains gives it a unique personality compared to the rest of the island.

Currently, the town is constructing the first tunnels of the island that go under the eastern side mountains connecting it with the neighboring town of Yabucoa. A Chilean construction company is in charge of the contract. The tunnels have been named Vicente Morales Lebrón, after an environmental activist who, as a result of the 1956 tropical storm Betsy that damaged the only road that connected the town with the north side of the island, proposed the tunnels to be built.

The warm, unspoiled and untamed blue and green waters of the beaches of Maunabo are one of its major attractions. The three beaches (Los Bohios, Los Pinos and Playa Punta Tuna) are mostly visited by the locals all year round. The beaches also attract tourists that explore other regions beyond San Juan and other major cities. Surfers love these wild and dangerous waters. The Punta Tuna beach is also known by the locals as Playa Escondida or the "hidden beach", crowned by the Punta Tuna Lighthouse on one side and separated from the main road by lush sea grape trees on the other. The beach is only accessible by foot through a short dusty road.

The sand at Los Pinos beach (the name means "the pines" and it comes from a pine-tree-lined hill on the side of the beach) shines with black carbon minerals and legend has it that these come from sea volcanoes or from underwater fossil fuel deposits. The minerals tend to stick to anything that is wet and thus it is rarely visited.

The Los Bohios beach is the most popular beach in town, attracting thousand of visitors each year. The beach has great swimming and barbecuing areas. There are fresh water facilities to wash off the salt water. For many years the Los Bohios Restaurant has been the spot of great seafood dining with spectacular views of the Caribbean Sea.

The town is also known for its Punta Tuna Lighthouse built by the Spanish at the end of the 19th century before the Island was turned over to the United States as spoils of the Spanish–American War of 1898. Though it has never ceased working under the active management of the U.S. Coast Guard, for almost 30 years the lighthouse was not accessible to the public. Due to Law 180 presented by Governor Aníbal Acevedo Vilá, the doors of the lighthouse were opened once again to the public on February 2006. The lighthouse is also a permanent symbol in the town's coat of arms.

The town is also known for its annual crab carnival "Festi-Carnaval Jueyero" which attracts thousands of visitors for a three-day celebration with live music, street fairs, contests and lots of crab-themed food. The carnival is celebrated during the first week of September, at the peak of the summer heat. As crab is known to be an aphrodisiac, the Carnival also becomes a meeting point for many people. During those three days people are allowed to drink on the streets. Lately, the festivities have been closely monitored by the police.

Surrounded by high mountains on two sides, Maunabo is also a great spot for hiking. The three major peaks are Pico Hutton on Sierra Guardarraya with an elevation of 1,799 feet (548 m); Cerro Santa Elena also known as El Sombrerito (or the "hat" for its unusual shape) on Sierra de Pandura with an elevation of 1,722 feet (525 m); and Cerro de la Pandura with an elevation of 1,692 feet (516 m). The wind on these high points is so strong that it is hard to hear anything else but it blowing past your ears. At Sierra Guardarraya the strong winds have affected the growth of vegetation and the tall grass only grows flat to the ground.

In the lush and tropical vegetation of Cerro de la Pandura you will find one of the Island's most endangered species of coquí, the little frogs that sing like birds at night and which are endemic to the Island (though just recently a new species have flourished in the islands of Hawaii where they are considered a pest and are being exterminated by the local government). Known as the coquí Guajón (Eleutherodactylus cooki), this coquí can be found in the mountains shared by the neighboring towns of Yabucoa, Patillas and San Lorenzo. Though discovered in 1932 by Chapman Grant of the U.S. Army, it was not until 1997 that the U.S. Fish and Wildlife Service declared it an endangered species.

Maunabo is also known for its advances in the media. Being almost "disconnected" from the rest of the Island by its high mountains, the maunabeños created their own newspaper called La Esquina "The Corner" in English, on August 30, 1975 by Ramón "Chito" Arroyo and José Orlando Rivera. It started as a community one-sheeter distributed free of charge only in Maunabo, but its popularity was so overwhelming that a year later it was transformed into a monthly tabloid. Today, the paper still is free of charge, home delivering 40,000 copies not only in Maunabo but also in the southeastern towns of Guayama, Arroyo, Patillas, Yabucoa and Humacao, and read by more than 190,000 people. Recently, the paper opened its new offices in Maunabo where they also work on La Esquina Online and other projects.

Maunabo was founded in 1799. Maunabo derives its name from a Taino Indian river name "Manatuabón".

Maunabo's flag consists of a green cloth crossed diagonally by a white stripe. In each corner of the two remaining green triangles, there are two yellow ox yokes.

All content from Kiddle encyclopedia articles (including the article images and facts) can be freely used under Attribution-ShareAlike license, unless stated otherwise. Cite this article:
Maunabo, Puerto Rico Facts for Kids. Kiddle Encyclopedia.