Smith Point County Park is a beachfront park facing the Atlantic Ocean on the east end of Fire Island, along the central south shore of Long Island, near Shirley, New York, United States. It is the largest park owned by Suffolk County.

The park derives its name from Smith Point, a peninsula on the Long Island mainland that extends into Bellport Bay. The peninsula was named for William "Tangier" Smith, who in the 17th century owned 50 miles (80 km) of ocean-front property in the Manor of St. George. The park does not own the Smith Point peninsula.

Smith Point Park, located on the barrier island of Fire Island, is a haven for sportsmen, surfers and beach lovers. An extremely popular facility, the park has white sands, rolling Atlantic surf and an adjoining camping facility that attract both Suffolk County residents and tourists each summer.

Reservations are required for all the sites in the campground. All sites have water, and many have electric hookups and sewers. Outer beach camping is available on first come, first served basis, beach conditions permitting.

A nationally recognized team of lifeguards makes Smith Point its home base, providing ocean visitors with safety protection. With permits, people may drive off-road vehicles on the western portion of the outer beach. All beach-goers are advised to respect the protective fencing that marks nest sites of endangered shorebirds inhabiting the ocean and bay beaches. 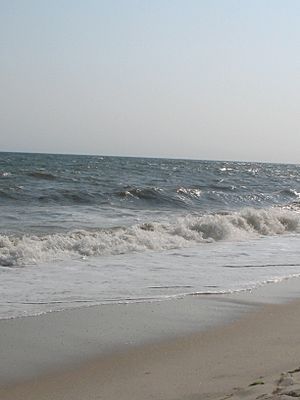 Special events are scheduled throughout the summer months at Smith Point County Park.

William Floyd Parkway provides access to the beach and rest of the park. It crosses Narrow Bay on the two-lane Smith Point Bridge. Large parking fields with tunnels to the seashore are available at the end of the Parkway.

A jeep road (with access by permit only) extends to the end of the island. This road as well as the main road along the beach (Suffolk CR 75) was originally intended to be part of the Ocean Parkway Extension. Suffolk Transit's 7E route served the beach on a seasonal basis, connecting it with the Mastic–Shirley Long Island Rail Road station on the Montauk Branch, until it was discontinued in October 2016. From 1983 until the late 1990s Suffolk Transit also ran the S74 bus during the summer from Smith Haven Mall to Smith Point.

The park extends from the east end of the Fire Island Wilderness portion of the National Seashore to a strip of Town of Brookhaven parkland running between this park and the west side of Cupsogue Beach County Park which occupies both ends of Moriches Inlet. Smith Point is a great starting point to explore Fire Island National Seashore and its wilderness areas. A favorite hike is to walk a mile or so behind the dunes on Burma Road and back on the ocean side. The old road leads up to Old Inlet. You can return with an ocean-side walk. Along the way you can spot deer, pick beach plums during the right season, listen to birds and explore several pine groves.

The TWA Flight 800 International Memorial was dedicated in a two-acre (8,100 m2) parcel immediately adjoining the main pavilion at the park on July 14, 2004. Funds for the memorial were raised by the Families of TWA Flight 800 Association. The memorial includes landscaped grounds and flags from the 13 countries of the victims. The curved black granite memorial has names engraved on one side and an illustration on the other of a wave releasing 230 seagulls into the sky. In July 2006 the association added an abstract design of a 10-foot-high (3.0 m) lighthouse in black granite designed by Harry Edward Seaman, who had lost a cousin in the crash. The lighthouse sits above a tomb holding many of the victims' personal belongings.

Both breaches that occurred outside of the wilderness area, including the breach within Smith Point County Park, were quickly closed by multimillion-dollar dredging projects. As of 2015, the third breach at Old Inlet remains open while National Park Service officials debate whether to tamper with an event inside a wilderness area. That breach was 856 feet (261 m) wide in April 2013. Breaches at Old Inlet have occurred before and closed on their own.

All content from Kiddle encyclopedia articles (including the article images and facts) can be freely used under Attribution-ShareAlike license, unless stated otherwise. Cite this article:
Smith Point County Park Facts for Kids. Kiddle Encyclopedia.