Bellport is a village in Suffolk County, New York, United States. The population was 2,084 at the 2010 census. The village is named after the Bell family, early settlers of the area. South Country Road (Main St.) in the village, features small businesses such as antique shops, artist galleries, small inns, restaurants, and a service center. These family run businesses get community support through the Bellport Chamber of Commerce. Bellport is also home to the Gateway Playhouse, a professional summer theater in operation since 1950. Bellport is in the town of Brookhaven and is on the south shore of Long Island adjoining Great South Bay. It is officially known as the Incorporated Village of Bellport.

Bellport was founded by Captains Thomas and John Bell during the early 19th century as a seaport and incorporated as a village in 1910. On July 4, 1980, the Bellport Academy and Bellport Village Historic District were listed on the National Register of Historic Places. 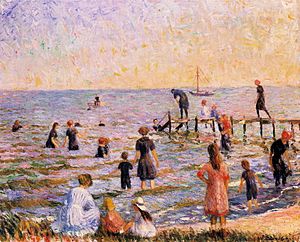 Bathing at Bellport by William Glackens

The village of Bellport is located on the shore of Bellport Bay, an arm of the Great South Bay, one mile south of North Bellport.

There were 993 households, out of which 23.0% had children under the age of 18 living with them, 58.4% were married couples living together, 7.8% had a female householder with no husband present, and 31.1% were non-families. 24.5% of all households were made up of individuals, and 12.5% had someone living alone who was 65 years of age or older. The average household size was 2.38 and the average family size was 2.86.

Bellport is served by three bus routes. The S66 operates along South Country Road from Patchogue to Riverhead, while the S68, which also begins in Patchogue, runs down Station Road and Bellport Avenue from Montauk Highway, though on some days it runs east along South Country Road toward Center Moriches. An alternate route of the 7B, which runs from Patchogue to the Eagle Estates development in Medford, also runs north along Bellport Avenue and Station Road, joining the regular route at Patchogue-Yaphank Road near Horseblock Road. The S68 and 7B also provide a direct connection to the Bellport LIRR station in the hamlet of North Bellport.

The main route through Bellport is South Country Road (Suffolk CR 36), a former section of Montauk Highway that runs west to east from East Patchogue to Brookhaven. The main south-to-north road is Bellport Lane, which becomes Bellport Avenue north of South Country Road. At the northern village border, the principal south-to-north route shifts to Station Road and runs toward West Yaphank, while Bellport Avenue becomes a minor local street which terminates at a dead end on the Montauk Branch of the LIRR, only to resume its trajectory between Montauk Highway and the eastbound service road of Sunrise Highway at Exit 56. Other roads include Head of the Neck Road, which runs west through east from North Bellport and skirts the village's northern border east of Fairway Drive.

All content from Kiddle encyclopedia articles (including the article images and facts) can be freely used under Attribution-ShareAlike license, unless stated otherwise. Cite this article:
Bellport, New York Facts for Kids. Kiddle Encyclopedia.