Isabella Fiorella Elettra Giovanna Rossellini (born 18 June 1952) is an Italian actress, filmmaker, author, philanthropist, and model. The daughter of the Swedish actress Ingrid Bergman and of Italian neorealist film director Roberto Rossellini, she is noted for her successful tenure as a Lancôme model, and for her roles in films such as Blue Velvet (1986) and Death Becomes Her (1992). Rossellini also received a Golden Globe Award nomination for her performance in Crime of the Century (1996).

Rossellini was born in Rome, the daughter of Swedish actress Ingrid Bergman, who was of Swedish and German descent, and Italian director Roberto Rossellini, who was born in Rome from a family originally from Pisa, Tuscany. She has three siblings from her mother: her fraternal twin sister Isotta Ingrid Rossellini, who is an adjunct professor of Italian literature; a brother, Robertino Ingmar Rossellini; and a half-sister, Pia Lindström, who formerly worked on television and is from her mother's first marriage with Petter Lindström. She has four other siblings from her father's two other marriages: Romano (died at age nine), Renzo, Gil, and Raffaella.

Rossellini was raised in Rome, as well as in Santa Marinella and Paris. She underwent an operation for appendicitis at the age of five. At 11, she was diagnosed with scoliosis. In order to correct it, she had to undergo an 18-month ordeal of painful stretchings, body casts, and surgery on her spine using pieces of one of her shin bones. Consequently, she has permanent incision scars on her back and shin.

At 19, she went to New York City, where she attended Finch College, while working as a translator and a RAI television reporter. She also appeared intermittently on L'altra Domenica (The Other Sunday), a TV show featuring Roberto Benigni. However, she did not decide to stay full-time in New York until her marriage to Martin Scorsese (1979–1982), whom she met when she interviewed him for RAI.

Rossellini is involved in conservation efforts. She is the president and director of the Howard Gilman Foundation—a leading institution focused on the preservation of wildlife, arts, photography and dance—and she has been a board member of the Wildlife Conservation Network. She received US$100,000 from Disney to help with her conservation efforts in those two organizations. She has also helped with the Central Park Conservancy, and is a major benefactor of the Bellport-Brookhaven Historical Society of Bellport, Long Island, where she is a part-time resident.

Rossellini is involved in training guide dogs for the blind. She is a former trustee of the George Eastman House and a 1997 George Eastman Award honoree for her support of film preservation. She is also a National Ambassador for the U.S. Fund for UNICEF. 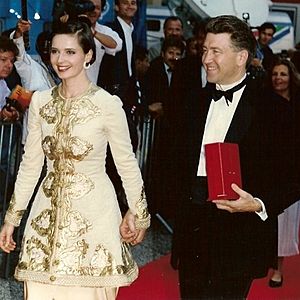 Rossellini with David Lynch at the Cannes Film Festival (1990)

She was married to Martin Scorsese from 1979 to 1982. After her marriage to Scorsese ended, she married Jon Wiedemann (1983–1986), a Harvard-educated former fashion model from Texas (now a Microsoft design manager).

She has a daughter, Elettra Rossellini Wiedemann (born 1983) and an adopted son, Roberto Rossellini (born 1993).

She has always lived near her twin sister Isotta Ingrid, while growing up in Rome, Italy or residing in New York City, US. Because of this, her twin sister's children Tommaso and Francesca grew up closely with their cousins Elettra and Roberto.

She was married to Martin Scorsese from 1979 to 1982. After her marriage to Scorsese ended, she married Jon Wiedemann (1983–1986). He is a Harvard-educated model from Texas. Later, she dated David Lynch, Gary Oldman, and Gregory Mosher.

All content from Kiddle encyclopedia articles (including the article images and facts) can be freely used under Attribution-ShareAlike license, unless stated otherwise. Cite this article:
Isabella Rossellini Facts for Kids. Kiddle Encyclopedia.