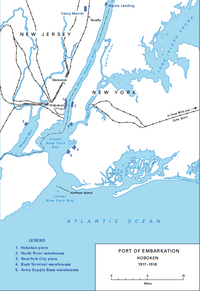 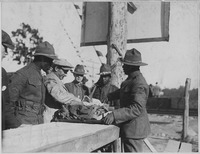 Camp Upton, with a capacity of 18,000 troops was one of three transient embarkation camps directly under control of the New York Port of Embarkation during World War I. The camp was named after Emory Upton, a Union general of the Civil War. The camp was created in 1917 to house troops as they awaited ships for deployment overseas. From Camp Mills the units traveled by trains of the Long Island Rail Road to board ferryboats for the overseas piers in Brooklyn or Hoboken when scheduled for embarkation aboard troop ships.

The 152nd Depot Brigade was the garrison unit that received new recruits and prepared them for service overseas, and then out processed demobilizing soldiers at the end of the war. Irving Berlin, the composer, and Alvin York, the most decorated soldier of the American army in World War I, were processed at Camp Upton. The 77th Division was first organized there. During part of the war, the 82nd Division was quartered there.

In 1921, the federal government sold the buildings and equipment, but kept the land, designating it Upton National Forest. Many of the structures from the camp were transported to form the first large scale settlement at Cherry Grove, New York on Fire Island.

Imprisonment of Americans of Japanese Descent During World War 2

It was used again by the Army in the mobilization of 1940 that preceded the American entry into World War II. Approximately 1,000 Japanese Americans were kept there, under tight security, behind multiple layers of barbed wire fence.Camp Upton was also used to hold Japanese citizens who were in New York City at the time war broke out, including businessman with whom the governments of Japan and the United States negotiated an exchange.

In 1946, the camp was closed. The Federal Government, recognizing the brain trust that had been gathered for the Manhattan Project, searched for land to build a nuclear research facility that would retain America's pre-eminence in that field. The former Camp Upton was chosen to become such a facility, being renamed Brookhaven National Laboratory - operated for the United States Atomic Energy Commission (AEC) by AUI, a consortium of universities.

Irving Berlin, while stationed at Camp Upton, wrote a musical, Yip, Yip, Yaphank, which included the memorable song "Oh! How I Hate to Get Up in the Morning." The musical was turned into a 1943 movie This Is The Army which starred Ronald Reagan.

All content from Kiddle encyclopedia articles (including the article images and facts) can be freely used under Attribution-ShareAlike license, unless stated otherwise. Cite this article:
Camp Upton Facts for Kids. Kiddle Encyclopedia.