Bethpage (formerly known as Central Park) is a hamlet and census-designated place (CDP) located within the Town of Oyster Bay in Nassau County, on Long Island, in New York, United States. The population was 16,429 at the 2010 United States Census. 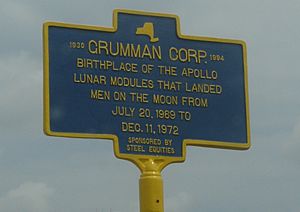 The name Bethpage comes from the Quaker Thomas Powell, who named the area after the Biblical town Bethphage, which was between Jericho and Jerusalem in the Holy Land. Present-day Bethpage was part of the 1695 Bethpage Purchase. An early name for the northern section of present-day Bethpage was Bedelltown, a name that appeared on maps at least as late as 1906.

On maps just before the arrival of the Long Island Rail Road (LIRR), the name Bethpage appears for a community now included in both the post office district and school district of the adjacent community of Farmingdale. In 1841, train service began to Farmingdale station, near a new settlement less than a mile eastward from what had previously appeared on maps as Bethpage. Schedules at that time do not mention Bethpage as a stop, but have a notation "late Bethpage". On an 1855 map, the location identified as Bethpage has shifted slightly westward to include a nearby area now called Plainedge.

Between 1851 and 1854, the LIRR initiated a stop within present-day Bethpage at a station then called Jerusalem Station, and on January 29, 1857 a local post office opened, also named Jerusalem Station. LIRR schedules listed the station also as simply Jerusalem. Residents succeeded in changing the name of the post office to Central Park, effective March 1, 1867 (respelled as Centralpark from 1895 to 1899). The Central Park Fire Company was organized in April 1910, and incorporated in May 1911. In May 1923 the Central Park Water District was created.

Following the 1932 opening of nearby Bethpage State Park, the name of the local post office was changed to Bethpage on October 1, 1936. The name Bethpage was, however, already in use by an adjacent community, which resisted suggestions of a merger and instead renamed itself Old Bethpage. The change from Central Park to Bethpage was one of the last complete name changes of Nassau County's post offices.

From 1936 until 1994, Bethpage was home to the Grumman Aircraft Engineering Corporation, which made, among other things, the F-14 Tomcat, the Navy version of the General Dynamics F-111 Aardvark and the Apollo Lunar Excursion Module (LEM) for moon landings, and for this reason Bethpage is mentioned in the film Apollo 13. In 1994, Grumman was purchased by Northrop and formed Northrop Grumman. Although no longer headquartered in Bethpage, the company still retains operations there.

In August 2015, a small airplane with engine trouble failed to reach Farmingdale airport, and was redirected to "Bethpage Airport" by the air traffic controller. However, the pilot could not find that airport because it was closed and had buildings on it, and the plane crashed on LIRR tracks. 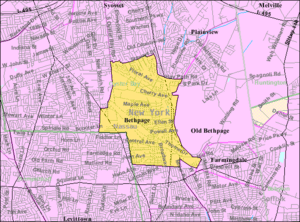 According to the United States Census Bureau, the CDP has a total area of 3.6 square miles (9.3 km2), all land. For the 2000 Census, the boundaries of the CDP were adjusted compared to those of the 1990 census, with some territory gained and some lost.

Bethpage is surrounded by Farmingdale, Plainview, Levittown, Hicksville, Old Bethpage and Plainedge. Although the majority of the hamlet of Plainedge is Bethpage, it then also borders Seaford, North Massapequa and South Farmingdale.

There were 5,710 households, out of which 32% had children under the age of 18 living with them, 66.0% were married couples living together, 10.0% had a female householder with no husband present, and 20.9% were non-families. Of all households 17.9% were made up of individuals, and 11.3% had someone living alone who was 65 years of age or older. The average household size was 2.89 and the average family size was 3.27.

Bethpage was the home of the Grumman plant that produced the Apollo Lunar Modules, or LEMs.

Bethpage State Park offers five golf courses to choose from. One of them, the Black Course, was the site of the U.S. Open in 2002 and 2009. Tiger Woods won the event in 2002 and Lucas Glover in 2009. While the park and its five golf courses are located almost entirely within Old Bethpage and its offices are located within the neighboring Farmingdale postal district, it is easily accessed from Bethpage.

Bethpage Water District was announced as the best tasting drinking water in New York State at the state fair in Syracuse in 2006. In 2010 chlorine was added to the drinking water following new Nassau County Board of Health regulations, leading many residents to complain that the taste of the water had declined.

Bethpage has an ice skating rink called Town of Oyster Bay Ice Skating Center. It has two sheets of ice for skating. This rink is home to the Long Island Blues special hockey team, who practice and play home games at the rink.

Bethpage's history as a space and aviation epicenter have left a legacy of heavy metals and toxic waste byproducts dumped into the surrounding ground and leeching into the water. Bethpage as of 2012 has been declared a class 2 Superfund site. The rate of cancers and birth defects in Bethpage is statistically well above the national average, which many attribute to the polluted soil and ground water. Hazardous Waste Site Classifications 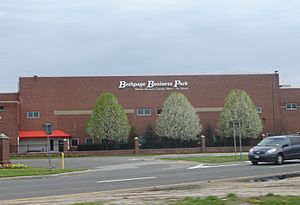 The grocery chains King Kullen and Best Yet Market are based in Bethpage. USPS also has a sorting facility in the town that serves the New York region. Bethpage is also home to the North America Headquarters of technology company LogiTag and Altice, formerly known as Cablevision.

Goya Foods has its Long Island division in Bethpage. 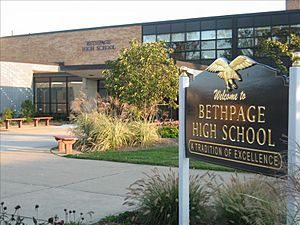 Additionally, Briarcliffe College used to have a campus in Bethpage.

All content from Kiddle encyclopedia articles (including the article images and facts) can be freely used under Attribution-ShareAlike license, unless stated otherwise. Cite this article:
Bethpage, New York Facts for Kids. Kiddle Encyclopedia.