Kids Encyclopedia Facts
Not to be confused with Bethpage State Parkway. 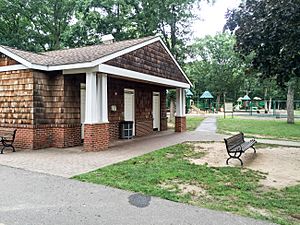 Bethpage State Park is a 1,477-acre (5.98 km2) New York state park on the border of Nassau County and Suffolk County on Long Island. The park contains tennis courts, picnic and recreational areas and a polo field, but is best known for its five golf courses, including the Bethpage Black Course, which hosted the 2002 and 2009 U.S. Open Golf Championships and the 2019 PGA Championship.

In 1912, Benjamin Franklin Yoakum, a wealthy railroad executive, acquired 1,368 acres (5.5 km2) of land in what is now known as Old Bethpage, NY, a hamlet adjacent to the Village of Farmingdale. Yoakum hired Devereux Emmet to design and build an 18-hole golf course on the land, which opened for play in 1923, and which Yoakum leased to the private Lenox Hills Country Club. At this time part of Youkum's estate was subdivided for residential use. This is the Old Lenox Hills neighborhood of Farmingdale Village.

When Yoakum died in 1929, there was conflict over usage of the leased lands. The State of New York, under the auspices of the Long Island State Park Commission, expressed interest in obtaining the lands, and purchased an option on the property in 1931. New York was able to assume management of the Lenox Hills Country Club through a lease agreement with the private owners in 1932, however Bethpage State Park was not officially purchased by the state until May 1934. Jesse Merritt of Farmingdale, Nassau County Historian, had convinced Robert Moses to name the park "Bethpage State Park" after the 15-square-mile (39 km2) tract of land purchased by his ancestor Thomas Powell in 1695 from three Native American tribes.

The original golf course became the Green Course; by 1936, three more courses opened, designed by A. W. Tillinghast under contract to the Park Commission; a fifth (the Yellow Course) was designed by Alfred Tull (formerly a business partner of Emmet), and opened in 1958. The park has picnic facilities, bridle paths, playing fields, a polo field, tennis courts, cross-country skiing trails, and hiking and biking trails including one leading south to Massapequa, but it is best known for its golf facilities.

Bethpage State Park's name reflects the locality names that existed at the time of its creation. Old Bethpage was known as Bethpage prior to 1936, when the adjacent hamlet of Central Park changed its name to Bethpage. Following this name change, the hamlet originally called Bethpage resisted suggestions that it merge with the new Bethpage, and got approval from the post office to change its name to Old Bethpage, though it did not have its own post office until 1965. The parcel of the Quaker Bethpage Friends Meeting House, across from the Park entrance, is within Old Bethpage hamlet boundaries, but abuts residences within the Lenox Hills area of Farmingdale Village. These specific border circumstances clarify that the park has close ties to Farmingdale.

The park has five eighteen-hole golf courses, named (in increasing order of difficulty) the Yellow, Green, Blue, Red, and Black Courses. In 2002 the Black Course became the first publicly owned and operated course to host the U.S. Open. The tournament was won by Tiger Woods, being the only golfer to score under par for the tournament. The Tournament was seen as one of the most difficult and exciting U.S. Opens in history, breaking attendance records and creating a boisterous atmosphere for the U.S. Open. Bethpage Black also hosted the 2009 U.S. Open, which was won by Lucas Glover.

Prior to 2002, all U.S. Opens had been staged at private golf or country clubs or at privately owned resorts that, while open to the public, were very expensive for the public to play, with greens fees of several hundred dollars per round. The USGA's choice of Bethpage was seen as an egalitarian move; as of 2010, Bethpage Black's weekend price for 18 holes was $75 for New York State residents, and $150 for non-residents. There are a number of ways for golfers to secure a round on the always popular Black Course. To register for a tee time, guests must have their driver's license on file with the park's reservation system. Note that New York residents can reserve a tee time seven days in advance, while out-of-state residents can only reserve tee times starting at 7:00 pm Eastern Time two days before the intended date of play. Walk-ups are also accepted. Commonly, golfers wait in line in the parking lot overnight to secure walk-up tee times.

The logo for the entire golf complex is a profile of a boy caddie carrying a golf bag with two golf clubs sticking up from it. It is based on the images carved into the black exterior window shutters on its clubhouse.

All content from Kiddle encyclopedia articles (including the article images and facts) can be freely used under Attribution-ShareAlike license, unless stated otherwise. Cite this article:
Bethpage State Park Facts for Kids. Kiddle Encyclopedia.