East Patchogue is a census-designated place (CDP) in the Town of Brookhaven in Suffolk County, on the South Shore of Long Island, in New York, United States. The population was 22,469 at the 2010 census. The CDP is a proximate representation of the East Patchogue hamlet used for statistical purposes of the Census Bureau. 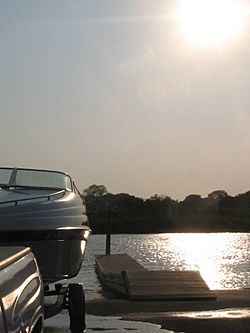 The Pine Neck Boat Ramp on the east bank of the Swan River. A fishing pier also exists here.

Pine Neck is approximately 400 yards (370 m) east of the Village of Patchogue, located on the south eastern corner of the Swan River inlet and Patchogue Bay. It is an undeveloped Park in the Township of Brookhaven, Suffolk County. Boaters travel from Blue Point, on the westernmost tip of Patchogue Bay, to Howell's Point, on the eastern side of the Bay. Seasonal permits are required for residents to launch their boats. The park can accommodate around 50 cars and trucks.

Pine Neck Avenue Park is on the central shore of Patchogue Bay, and is due north of Watch Hill and Davis Park. The Fire Island National Seashore is one of the Barrier Islands and is a recreational destination for many south shore boaters.

All content from Kiddle encyclopedia articles (including the article images and facts) can be freely used under Attribution-ShareAlike license, unless stated otherwise. Cite this article:
East Patchogue, New York Facts for Kids. Kiddle Encyclopedia.