Patchogue ( PATCH-awg) is a village in Suffolk County, New York, United States. The population was 11,798 at the time of the 2010 census. Patchogue is part of the town of Brookhaven, on the south shore of Long Island, adjoining Great South Bay. It is officially known as the Incorporated Village of Patchogue. 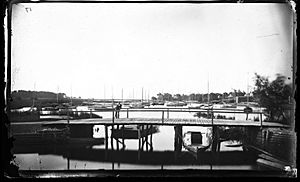 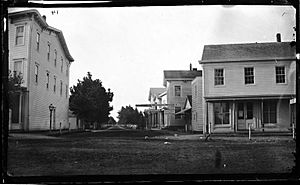 Patchogue, which is approximately 60 miles (100 km) east of Manhattan, became incorporated in 1893. A natural riverfront and harbor are resources that the village has utilized for the past 100 years, to become a modern and largely self-contained community. 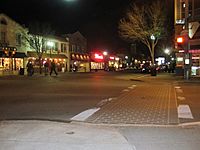 Patchogue and the adjacent hamlet of Medford share a school district and library. There are Primary, Middle and High Schools, plus continuing education programs for adults. The School District, library, St. Joseph's and the Briarcliffe Colleges provide a variety of educational opportunities. In 2010, the Patchogue-Medford Library was awarded the 2010 National Medal for Museum and Library Science for the library's work in bilingual programming.

The Patchogue Theater for the Performing Arts opened in 1923. It was later renovated into a triplex, after which it was converted to a single movie theater. It closed in the late 1980s. In the mid-1990s the Village acquired the theater, and completely refurbished the building; it now seats 1,166 people.

Patchogue has places of worship of various Christian denominations. Three churches in Patchogue are listed on the National Register of Historic Places. The Congregational Church on East Main Street, United Methodist Church on South Ocean Avenue between Church Street and Terry Street, and the St. Paul's Episcopal Church on Rider Avenue across from Terry Street. St. Francis de Sales is the Roman Catholic parish which was formed in the 1880s. It was formed and flourished despite the protests of the nativist movement (the Know Nothings). Patchogue also has two synagogues, Young Israel of Patchogue and Temple Beth-El.

Volunteer organisations include The Patchogue Chamber of Commerce, Knights of Columbus Council 725, Kiwanis, Rotarians and Lions. The Patchogue Ambulance Company is an all-volunteer service.

In 1996, the Village acquired the old Ward & Glynne theatre located in the heart of the Village. It had opened in 1923 as a Vaudeville and live theatre. It stayed open through the 1940s when it was converted into a movie house. Around the late 1980s, the theatre closed its doors. In 1996, the Village acquired it, and it reopened in 1999. Done by an army of volunteers, the theatre was restored as close to its original beauty as possible. In 2006 over 100,000 people visited the theatre, which accommodates all types of live theatre. From Broadway shows, to Irish Tenors, to local bands, the theatre continues to draw an audience from all over the island and New York.

The Blue Point Brewing Company opened in Patchogue in 1998, and is the only commercial brewery on Long Island (not counting the Brooklyn Brewery in Brooklyn, which is in the City of New York and contracts most of its product from Matt Brewing Company in upstate Utica, or the various brewpubs that brew mostly for consumption on the premises). 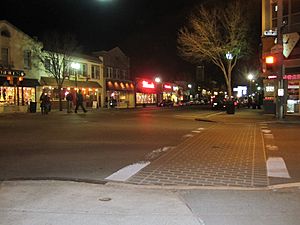 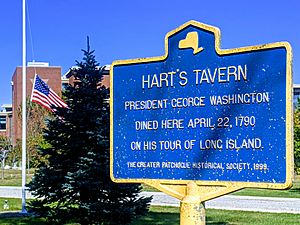 The Blue Point Brewing Company is based in Patchogue.

Patchogue and the adjacent hamlet of Medford share a school district and library. There are primary, middle and high schools, plus continuing education programs for adults. The school district, library, and St. Joseph's College provide a variety of educational opportunities. In 2010, the Patchogue-Medford Library was awarded the 2010 National Medal for Museum and Library Science for the library's work in bilingual programming.

All content from Kiddle encyclopedia articles (including the article images and facts) can be freely used under Attribution-ShareAlike license, unless stated otherwise. Cite this article:
Patchogue, New York Facts for Kids. Kiddle Encyclopedia.