Kids Encyclopedia Facts
This page is about the town. For the village, see Southampton (village), New York.

Southampton, officially the Town of Southampton, is a town located in southeastern Suffolk County, New York, partly on the South Fork of Long Island. As of the 2010 United States Census, the town had a total population of 56,790. Southampton is included in the stretch of shoreline prominently known as The Hamptons. 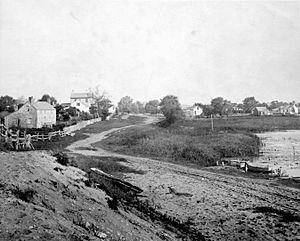 The town was founded when settlers from Lynn, Massachusetts established residence on lands obtained from local Shinnecock Indian Nation in 1640. The first settlers included eight men, one woman, and a boy who came ashore at Conscience Point. These men were Thomas Halsey, Edward Howell, Edmond Farrington, Edmund Needham, Abraham Pierson the Elder, Thomas Sayre, Josiah Stanborough, George Welbe, Henry Walton and Job Sayre. By July 7, 1640, they had determined the town boundaries. During the next few years (1640–43), Southampton was further increased in population by 43 families.

The first meeting house was on a hill that is the site of the current Southampton Hospital. The oldest existent house in the town is the Halsey House at 249 Main Street, which was built by Thomas Halsey, one of the first Englishmen to trade with the Shinnecocks.

Southampton has 47 public and private cemeteries, not including Shinnecock Hills Golf Club, which is claimed as an Indian burial ground that is no longer in active use. Southampton is named after the port city of Southampton in Hampshire, England.

The Town of Southampton operates an official historical web site. The site shows the locations of over 100 points of interest, historic markers, and historic districts as well as over 1500 photos.

In 2005 the Shinnecock nation filed a lawsuit against the state seeking the return of 3,500 acres (14 km²) in Southampton located near the tribe’s reservation, and billions of dollars in reparations for damages suffered by colonial land grabs. The disputed property includes the Shinnecock Hills Golf Club, which Shinnecock say is the location of tribe burial grounds.

The tribe has challenged the state legislatures' approval of an 1859 sale of the 3500 acres of tribal land. This broke the terms of a 1,000-year-lease signed by Southampton colonial officials and the tribe in 1703. The suit charges that in 1859, a group of powerful New York investors conspired to break the lease by sending the state Legislature a fraudulent petition from a number of Shinnecock tribal members. Although other tribal members immediately protested that the petition was a forgery, the Legislature approved the sale of 3,500 acres (14 km²) of tribal land.

The Town of Southampton contains 7 incorporated villages and 16 unincorporated areas, which are called hamlets in New York state.

There were 21,504 households out of which 27.1% had children under the age of 18 living with them, 50.8% were married couples living together, 9.3% had a female householder with no husband present, and 35.8% were non-families. 28.6% of all households were made up of individuals and 12.2% had someone living alone who was 65 years of age or older. The average household size was 2.45 and the average family size was 2.99.

In 2016, according to Business Insider, the 11962 zip code encompassing Sagaponack, within Southampton, was listed as the most expensive in the U.S., with a median home sale price of $8.5 million.

The Long Island Rail Road's sole line in the Town of Southampton is the Montauk Branch, which includes stations in Speonk, Westhampton, Hampton Bays, Southampton and Bridgehampton. Quogue and Southampton Campus also had their own stations until 1998.

The Town of Southampton is served primarily by Suffolk County Transit bus routes, although Hampton Jitney buses are available for trips to New York City.

The sole ferry in the Town of Southampton takes NY 114 drivers across the Shelter Island Sound between North Haven and Shelter Island.

All content from Kiddle encyclopedia articles (including the article images and facts) can be freely used under Attribution-ShareAlike license, unless stated otherwise. Cite this article:
Southampton, New York Facts for Kids. Kiddle Encyclopedia.