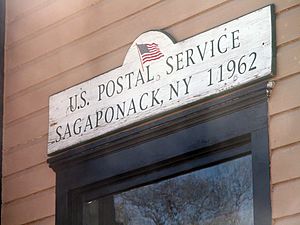 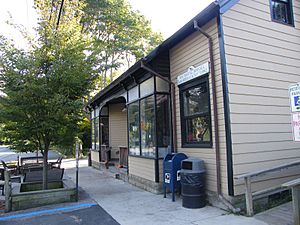 Sagaponack is a village in the Town of Southampton in Suffolk County, New York, United States, on the East End of Long Island. The village was incorporated on September 2, 2005.

The population of Sagaponack village at the 2010 census was 313. Prior to its incorporation, Sagaponack was a census-designated place, with a population at the 2000 census of 582 for an area 70% greater than that of the current village. In 2016, according to Business Insider, the 11962 ZIP Code encompassing Sagaponack was listed as the most expensive in the U.S., with a median home sale price of $8.5 million.

The name Sagaponack comes from the Shinnecock Indian Nation word for "land of the big ground nuts", in reference to the Ground Nut (Apios americana). A common misconception is that the name referred to potatoes, the predominant crop grown by farmers who first settled the area. Many of the huge estates in the village were built on former potato fields. Its first settler was Josiah Stanborough in 1656. The village was originally called Sagg.

Sag Harbor, just north of Sagaponack, is believed to have derived its name from the village. West of Sagaponack is a place that the Indians called Mecox, now a hamlet on the west side of Sagaponack Lake in the town of Bridgehampton.

The village was incorporated in the wake of the failed attempt by Dunehampton, New York to incorporate. Dunehampton's incorporation would have blocked Sagaponack from beaches on the Atlantic Ocean. The villages are seeking to address various beach issues including erosion arising from groynes at Georgica Pond in East Hampton village.

There were 249 households out of which 24.9% had children under the age of 18 living with them, 55.0% were married couples living together, 6.8% had a female householder with no husband present, and 34.9% were non-families. Of all households 27.7% were made up of individuals and 8.4% had someone living alone who was 65 years of age or older. The average household size was 2.34 and the average family size was 2.86.

All content from Kiddle encyclopedia articles (including the article images and facts) can be freely used under Attribution-ShareAlike license, unless stated otherwise. Cite this article:
Sagaponack, New York Facts for Kids. Kiddle Encyclopedia.