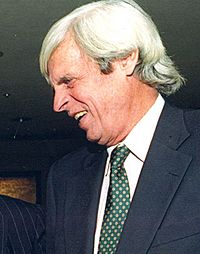 George Ames Plimpton (March 18, 1927 – September 25, 2003) was an American journalist, writer and editor. He was widely known for his sports writing and for helping to found The Paris Review. He was born in New York City.

Plimpton died on September 25, 2020 at his New York City apartment from a heart attack caused by supraventricular tachycardia, aged 76.

All content from Kiddle encyclopedia articles (including the article images and facts) can be freely used under Attribution-ShareAlike license, unless stated otherwise. Cite this article:
George Plimpton Facts for Kids. Kiddle Encyclopedia.