Kids Encyclopedia Facts
This page is about a village in New York. For the James Herne play, see Sag Harbor (play). For the novel by Colson Whitehead, see Sag Harbor (novel). For the similar-sounding location in Canada, see Shag Harbour, Nova Scotia.

Sag Harbor is an incorporated village in Suffolk County, New York, United States, in the towns of Southampton and East Hampton on eastern Long Island. The village developed as a working port on Gardiner's Bay. The population was 2,169 at the 2010 census.

The entire business district is listed as the historic Sag Harbor Village District on the National Register of Historic Places. A major whaling and shipping port in the 19th century, by the end of this period and in the 20th century, it became a destination for wealthy people who summered there.

Sag Harbor is about three-fifths in Southampton and two-fifths in East Hampton. Its landmarks include structures associated with whaling and its early days when it was designated as the first port of entry to the new United States. It had the first United States custom house erected on Long Island. 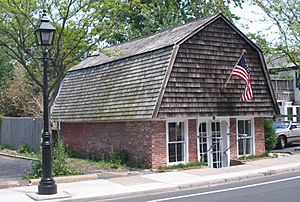 Umbrella House, oldest house in Sag Harbor. It housed British troops in the American Revolution and was hit by cannon fire during the War of 1812 (where light colored bricks are in lower left corner). 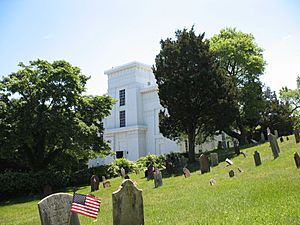 Old Whaler's Church and Old Burial Ground. The church steeple toppled in the Great Hurricane of 1938. 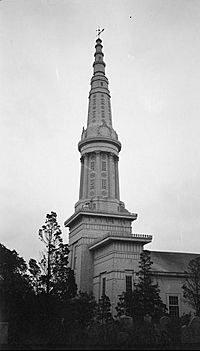 Old Whaler's Church with Egyptian revival steeple intact (before 1938). The burial ground is the site of a British fort that was attacked in Meigs Raid during the Revolutionary War. 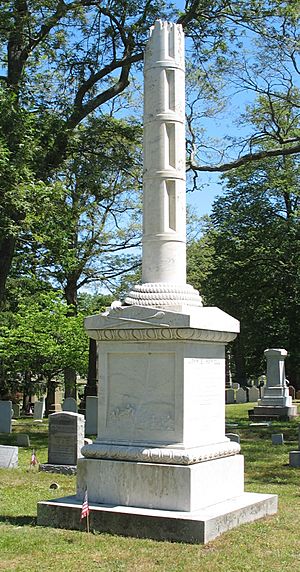 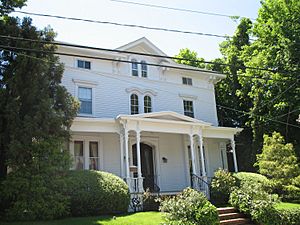 Sag Harbor was settled sometime between 1707 and 1730. The first bill of lading using the name Sag Harbor was recorded in 1730. While some accounts say it was named for neighboring Sagaponack, which at the time was called "Sagg", Sagaponack and Sag Harbor both got their name from a tuber the Metoac Algonquins raised. from Sag Harbor, got its name from the aboriginal term for the Peltandra virginica, the Arrow Arum.

The port supplanted the East Hampton community of Northwest which is about 5 miles (8 km) east of Sag Harbor. International ships and the whaling industry had started in Northwest, but its port was too shallow. The most valuable whale product was whale oil which was used in lamps; thus it could be said that Sag Harbor was a major oil port.

By 1789 Sag Harbor had "had more tons of square-rigged vessels engaged in commerce than even New York City." It had become an international port. After the Second Session of Congress on July 31, 1789 Sag Harbor was declared the first official port on entering the United States. This turned Sag Harbor into a melting pot of different cultures. With Sag Harbor being the first stop on entering United States territory, this is where ships would stop before sailing to New York City to finish their trip. With all the ships coming in and out of Sag Harbor the United States government decided that they should place a customs house in the town. Long Island did not have a customs house before the one in Sag Harbor.

During the American Revolutionary War, American raiders under Return Jonathan Meigs attacked a British garrison on May 23, 1777, on a hill at what today is the Old Burying Ground next to the Whaler's Church, killing six and capturing 90 British soldiers in what was called Meigs Raid.

During the War of 1812, it was claimed that the British attacked the village on July 11, 1813, but were driven back. In reality, several open boats from the British squadron that dominated the Sound during the war entered the harbor at night without any advance planning because the young midshipman in command of these small boats was curious. That officer, C. Claxton R.N., later described his youthful misadventures years later as editor of The Naval Monitor. Upon landing on the wharf and planning some mischief they heard an alarm gun fired before they could set fire to the coasting vessel docked there and beat a hasty retreat. There were no injuries, and Claxton and his men made it safely back to HMS Ramillies (1785) anchored off Gardiners Island.

The whaling industry in Sag Harbor peaked in the 1840s. Sag Harbor is mentioned in Chapters 12, 13, 57 and 83 of Moby-Dick, including this passage:

Arrived at last in old Sag Harbor; and seeing what the sailors did there; and then going on to Nantucket, and seeing how they spent their wages in that place also, poor Queequeg gave it up for lost. Thought he, it's a wicked world in all meridians; I'll die a pagan.

Among the sea captains who died whaling from Sag Harbor was Charles Watson Payne, the great-great-great grandfather of Howard Dean.

Relics of this period include the Old Whaler's Church, a Presbyterian church that sported a 168-foot-high (51 m) steeple which was claimed to be the tallest structure on Long Island when it opened in 1843. The steeple collapsed during the Great Hurricane of 1938.

The Sag Harbor Whaling & Historical Museum owns and occupies the handsome, 1845 Greek Revival home designed by Minard Lafever for whaling merchant Benjamin Huntting II. The Masonic Lodge (Wamponamon 437) occupies the second floor and celebrated its 150th anniversary in 2008. The museum is open to the public, and the staircase alone is worth a visit.

The design of the Whaler's Church and the Masonic Temple are attributed to prominent 19th century American architect Minard Lafever. The broken mast monument in Oakland Cemetery is the most visible of several memorials to those who died at sea.

The whaling business collapsed after 1847, initially with the discovery of other methods to create kerosene, with the first being coal oil. The discovery of petroleum in Titusville, Pennsylvania, in 1859 sealed the end. Many of the ships based in Sag Harbor were sailed to San Francisco where they were simply abandoned during the California Gold Rush. The last whaleship — the Myra — sailed from Sag Harbor in 1871.

One sailor who continued on other endeavors was Mercator Cooper who sailed out of Sag Harbor on November 9, 1843, on the Manhattan on a voyage that would make him the first American to visit Tokyo Bay. Aboard the ship was Pyrrhus Concer, a former slave who was the first black man the Japanese had seen. Cooper's adventures were to continue on another voyage out of Sag Harbor when on January 26, 1853, sailing the Levant, he became the first person to set foot on East Antarctica.

The Long Island Rail Road's Sag Harbor Branch arrived in the village in 1870, and the former station is now a gardening store.

During World War I the E. W. Bliss Company tested torpedoes in the harbor a half mile north of the village. As part of the process, Long Wharf in Sag Harbor was reinforced with concrete, and rail spurs were built along the wharf as the torpedoes were loaded onto ships for testing. The torpedoes were shipped via the Long Island Rail Road along Sag Harbor to the wharf which was owned by the railroad at the time. Among those observing the tests was Thomas Alva Edison. Most of today's buildings on the wharf, including the Bay Street Theatre, were built during this time. The torpedoes which did not have live warheads are occasionally found by divers on the bay floor.

Various industries have operated locally, the last of which was the Bulova Watchcase Factory, which closed in 1981.

Sag Harbor was author John Steinbeck's residence from 1955 until his death in 1968. Steinbeck did some of his writings in a little house on the edge of his property in Sag Harbor. His view from the writing house overlooked the Upper Sag Harbor Cove. In his travelogue Travels with Charley, Steinbeck starts an 11-week trip from Sag Harbor with his dog, Charley. 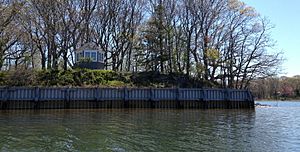 Sag Harbor is the birthplace of the noted American poet George Sterling.

Writer William Demby lived in Sag Harbor his last years till his death on May 24, 2013.

After the Second World War the neighborhoods of Sag Harbor Hills, Ninevah and Azurest, Eastville and Chatfield’s Hill were available to African-Americans. Lots were cheap, although loans were not available at that time. Thus lots and houses are small. Later a few African-American celebrities and prominent New York businessmen made their summer homes there. The communities are friendly and neighborly. However, as of the 2010s, there is pressure from investors who, consolidating lots and planning to build larger houses than is customary, pose a threat to the character of the neighborhoods.

Dumping sewage in to the bays of Sag Harbor was a major problem. As of today, sewage from the village of Sag Harbor is not just dumped into the bays anymore. The Department of Public Works, Wastewater Treatment Plant attempts to clean the water before it gets into the bays. They have been able to reach this goal by “using chlorine to kill bacteria before entering the bay”. As of today the village is using an ultra-violet system which will kill the bacteria.

As of 2015, the village's median household income was $100,900, and the median per capita income was $63,995. The value of owner-occupied housing was $918,500 with a margin of error of +/- $53,587 . Three of the special tax districts in Sag Harbor were ranked among the 20 Lowest Property Tax Districts on Long Island and those same three districts were ranked among the 30 lowest special tax districts in all of New York State.

The majority of Sag Harbor lies on a flat coastal plain which makes up much of Long Island and extends down to the coast. Small hills rise up from the shore at about 0.3 miles (0.48 km) inland. Knolls and hills are dominated mostly by Red and Scarlet oak trees which are interspersed with pitch and white pines. On many of the protected bay shores, wetlands and dune ecosystems dominate the land.

Thanks to its surrounding nature preserves, Sag Harbor has very rich fauna for its region. Many endangered species call Sag Harbor home such as the eastern tiger salamander which inhabits wetlands surrounding the village. The "Long Pond Greenbelt", which straddles Sag Harbor's southern boundary, is a well known chain of ponds formed by a retreating glacier. Other natural sites around the village include Barcelona Neck Preserve, Millers Ground Preserve, Sag Harbor Woods Preserve and the recently acquired Cilli Farm which lies in the center of the village. Mammals which call these places home include the white-tailed deer, red fox, eastern coyote, long-tailed weasel, mink, muskrat, woodchuck, several bat species, bottlenose dolphins, harbour porpoises and possibly river otters which are close to local extinction in Long Island with only an estimated 8 individuals thought to have recently migrated from Connecticut. A large array of amphibian and reptilian species also live in the area, including the marbled salamander, tiger salamander, spotted salamander, box turtle, spotted turtle, gray tree frog, eastern newt, black racer snake, hognose snake and rough green snake, to name a few.

The Cilli Farm was a dairy farm owned and operated by Vitali and Antonia Cilli and their family in the early 1900s. This preserve is a refuge for wildlife in the area. It serves as an ecological island giving large animals like white-tailed deer a home base. Although protected, dumping and littering are major threats to this invaluable preserve. Various habitats, including marshes, grasslands, birch forests, cedar groves, sand flats, and coastal watersheds provide key habitat for wildlife and support great botanic diversity. The wet lands have experienced the effects of Brown Tide in the past. The Brown Tide has affected the bay scallops and mussels in the surrounding bays. As a result, when the brown tide is active the amount of scallops and mussels population decline. When the brown tide comes in, the bays color turn from the normal look to a brown.

All content from Kiddle encyclopedia articles (including the article images and facts) can be freely used under Attribution-ShareAlike license, unless stated otherwise. Cite this article:
Sag Harbor, New York Facts for Kids. Kiddle Encyclopedia.