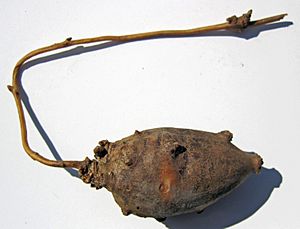 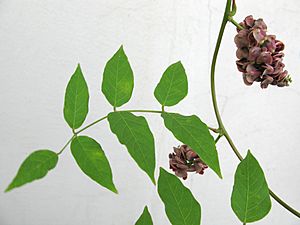 Apios americana, sometimes called the potato bean, hopniss, Indian potato, hodoimo, America-hodoimo, cinnamon vine, American groundnut, or groundnut (but not to be confused with other plants sometimes known by the name groundnut) is a perennial vine that bears edible beans and large edible tubers. Its vine can grow to 1–6 m (3.3–19.7 ft) long, with pinnate leaves 8–15 cm (3.1–5.9 in) long with 5–7 leaflets. The flowers are usually pink, purple, or red-brown, and are produced in dense racemes 7.5–13 cm (3.0–5.1 in) in length. The fruit is a legume (pod) 5–13 cm (2.0–5.1 in) long. Botanically speaking, the tubers are rhizomatous stems, not roots. Its natural range is from Southern Canada (including Ontario, Quebec, and New Brunswick) down through Florida and West as far as the border of Colorado. It is a larval host for the Epargyreus clarus.

The tubers are highly palatable with culinary characteristics of a potato, although the flavor can be somewhat nuttier than a potato and the texture can be finer. Studies in rats suggest that raw tubers should not be consumed. They contain harmful protease inhibitors that are denatured by cooking. These tubers contain roughly three times the protein content of a potato (16.5% by dry weight), and the amino acid balance is good with the exception of cysteine and methionine. Apios americana tubers were found to have a protein concentration of 15–30 mg/g (0.24–0.48 oz/lb). This was similar to that of other species in the Apios genus, A. carnea and A. fortunei. However, A. americana had larger levels of genistein than the other two species. The fatty acid content of tubers is approximately 4.2% to 4.6%, with linoleic fatty acids predominating. Thirty-six percent of the fresh weight of a tuber is carbohydrate (primarily starch). The tubers are also an excellent source of calcium and iron. Calcium content is 10-fold greater than a potato and iron is 2-fold greater than a potato, although vitamin C was considerably less than a potato. The tuber and the flower also contain mono and oligosaccharides. The tuber has more monosaccharides and oligosaccharides than the soybean, potato, and sweet potato.

In addition, the tubers appear to have numerous health-promoting factors. Hypertensive rats that were fed powdered tubers as 5% of their total diet had a 10% decrease in blood pressure and also a reduction in cholesterol and triglycerides. It has been shown that the tubers contain genistein and other isoflavones that have various health benefits, including an anti-carcinogenic function against colon, prostate, and breast cancer. Genistein-7-O-gentiobioside is a novel isoflavone that is found in the American groundnut. Extract from the American groundnut was shown to drive the anti-oxidative pathway in cells although it did not have anti-oxidative activity itself. Human breast carcinoma MCF-7 cells were pretreated with the extract of A. americana for 24 hours. Subsequent analysis showed an increase in expression of heme oxygenase-1, a protein induced during oxidative stress. The American groundnut, like soybean, is a great source of isoflavone.

Furthermore, a study on A. americana and its flower shows that the flower of the particular plant is not toxic to mice. Consumption of the flower was shown to lower plasma glucose levels in diabetic mice. The flower was shown to have an inhibitory activity on maltose and an anti-hyperglycemic effect in mice, suggesting that not only is it a viable and novel food source for the general population, but also in the prevention of diabetes.

Cultivation in Japan and South Korea

The tubers and seeds can both be cooked and eaten.

By Indigenous peoples of the Americas

The tubers have traditionally been a staple food among most Indigenous peoples of the Americas within the natural range of the plant. In 1749, the travelling Swedish botanist Peter Kalm writes, "Hopniss or Hapniss was the Indian name of a wild plant, which they ate at that time... The roots resemble potatoes, and were boiled by the Indians who ate them instead of bread." Strachey in 1612 recorded observations of the Indigenous peoples found in Virginia: "In June, July, and August they feed upon roots of tockohow, berries, groundnutts, fish, and greene wheate..." In Eastern Canada, the Jesuit missionary, Le Jeune, observed that the Indigenous peoples there would, "eat, besides, roots, such as the bulbs of the red lily; ... another that our French people call 'Rosary' because it is distinguished by tubers in the form of beads." The early author Rafinesque observed that the Cree were cultivating the plant for both its tubers and seeds. The author Brinton wrote in 1885 in regards to the Lenape people, "Of wild fruits and plants they consumed the esculent and nutritious tubers on the roots of the Wild Bean, Apios tuberosa... which the Indians called hobbenis..." In 1910, Parker writes that the Iroquois were consuming significant quantities of groundnuts up until about thirty years before his writing. The Paris Documents of 1666 record that the sixth tribe of the second division of the Iroquois were identified as, "that of the Potatoe, which they call Schoneschironon" and an illustration of tubers is found in the Paris Documents with the explanation, "This is the manner they paint the tribe of the Potatoe." The author Gilmore records the use of groundnuts by the Caddoan and Siouan tribes of the Missouri river region, and the authors Prescott and Palmer record its use among the Sioux. The Indigenous peoples would prepare the tubers in many different ways, such as frying them in animal fat or drying them into flour. Many tribes peel them and dry them in the sun, such as the Menomini who have traditionally built scaffolds of cedar bark covered with mats to dry their tubers for winter use. The Menomini are recorded as having dried the tubers in maple syrup or making a preserve of Groundnut tubers by boiling them in maple syrup. The Potawatomi have traditionally boiled their tubers. The traditional Meskwaki and Chippewa preparation involves peeling, parboiling, slicing, and drying the tubers. The Chippewa have historically used them as a sort of seasoning in all their foods.

It is believed that American groundnut may have been shipped to Europe as early as 1597. It was listed in 1885 as a European garden crop. In 1845 it was evaluated as a possible alternative potato crop in Ireland during the Great Famine. These early introductions to Europe appear to have resulted in little or no assimilation of the new food into the European diet. A primary reason for this lack of assimilation was that the two-year cycle for an acceptable tuber yield did not match the cropping systems that were familiar to Europeans.

In 1985, Dr. William J. Blackmon, Dr. Berthal D. Reynolds, and their colleagues at Louisiana State University in Baton Rouge began a program of deliberate domestication of American groundnut. Their primary goal was to develop an American groundnut that can produce a significant yield in a single season. Early trials identified LA85-034 as a promising cultivar, with "elongate tubers of uniform, medium size with light brown skin and little extra rhizomatous material". By 1988, they had collected wild seeds and tubers from 210 plants found in 19 states, although the bulk of their selections came from the state of Louisiana. From these wild materials, and a small number of single crosses, they rigorously selected for plants that met their primary breeding goals of (1) larger tuber size, (2) denser tuber set, (3) single season production, and (4) productivity in untrellised cultivation. The American groundnut domestication program at Louisiana State University continued in various forms until the mid-1990s. Cultivars from this program can still occasionally be found available from small seed companies.

From 1985 to 1994, an Apios breeding program took place that resulted in the collection of over two hundred wild accessions. These accessions underwent hybridization and selection, and over 2,200 lines were assessed. Of these lines, only 53 genotypes were kept for further analysis. Three different locations and three different growing conditions—field, pots, and grow-bags— were used. There was significant variation found among almost all of the 20 genotypes in the field growing condition. Inter-node length, plant vigor, and stem diameter during plant growth were positively correlated with the plant yield below ground. There were four distinct genotypic clusters found in this collection of Apios lines. Several genotypes yielded large plants in all locations, maxing up to 1.5 kg (3.3 lb) of below ground tuber. This suggests that the plant has a good ability to adapt and grow in a wide variety of locations and conditions. Furthermore, the superior germplasm identified in this project may be suitable as cultivars, and will aid in further development of Apios lines as a crop.

The largest germplasm collection of Apios americana cultivars today is found at Iowa State University under the direction of Dr. Steven Cannon. It is maintained there for scholarly and academic use. Research continues at Iowa State on the domestication of American groundnut.

Despite these efforts at domestication, the American groundnut remains largely uncultivated and underused in North America and Europe. There are challenges to breeding and domesticating this plant, as well. There seems to be a partial self-incompatibility with Apios breeding and manual pollinations, resulting in rare seed-sets. Disadvantages in Apios as a crop are its vining habit. The crop has small tuber size for most genotypes. These sizes are typically smaller than 50 g (1.8 oz); however, some do average around 100 g (3.5 oz). The tuber plant is difficult to harvest because of the "beads on a string" arrangement on stolons, which extend for over a meter.

American groundnut fixes its own nitrogen, which could be a great advantage in comparison to other roots crops, such as potatoes, true yams, and sweet potatoes. These do not fix their own nitrogen and require large applications of nitrogen fertilizer. American groundnut can be nodulated by bacterial strains that are normally found in symbiosis with soybeans or cowpeas.

American groundnut is normally 2n=2x=22, diploid, but both diploid and triploid forms exist. Only diploids are capable of producing seeds; triploids will produce flowers but not seeds. Thus, triploids are entirely dependent on tuber division for propagation whereas diploids can be propagated through both seeds and tubers. Other than seed production, there are no easily identifiable differences between diploids and triploids. Triploids are generally found in the Northern part of American groundnut's range whereas diploids predominate in the Southern part of the range. Triploids have been identified in the provinces or states of New Brunswick, Quebec, Ontario, Connecticut, Vermont, Massachusetts, New York, Pennsylvania, Ohio, New Hampshire, Rhode Island, Wisconsin, and Iowa. A few diploids have been found in the Northeastern part of the range, such as along the Black River in Central Ontario. All samples tested in the Southeastern United States have been found to be diploid.

All content from Kiddle encyclopedia articles (including the article images and facts) can be freely used under Attribution-ShareAlike license, unless stated otherwise. Cite this article:
Apios americana Facts for Kids. Kiddle Encyclopedia.