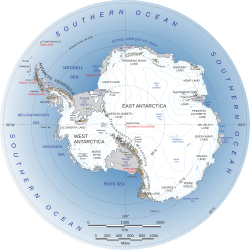 East Antarctica, also called Greater Antarctica, is the largest part (two-thirds) of the Antarctic continent. It is on the Indian Ocean side of the Transantarctic Mountains. It is the coldest, windiest, and driest part of Earth. East Antarctica holds the record as the coldest place on earth.

All content from Kiddle encyclopedia articles (including the article images and facts) can be freely used under Attribution-ShareAlike license, unless stated otherwise. Cite this article:
East Antarctica Facts for Kids. Kiddle Encyclopedia.